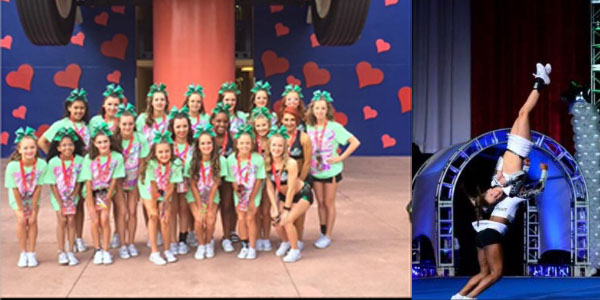 Sophomore Bailey Wright cheers both in and out of school.

Freshman competitive cheerleader Bailey Wright has been through a lot to continue to do what she loves.

“She was actually born with her kneecap in two pieces,” mom Missy Wright said. “It got to the point where she couldn’t even lift her knee to tie her shoe. We wouldn’t have known anything was wrong with her knee ever had she not been tumbling in such a competitive way and they said she would have found out anything she did competitive, it wasn’t actually a cheer accident. We went to the orthopedic and they did x-rays and her kneecap was in two pieces and they had to put screws in it.”

That didn’t slow Bailey down.

If football is considered the king of high school life in Texas, cheerleading may be its queen with Bailey joining the trend at an early age.

“I started when I was really young,” Bailey said. “I enjoyed it because the team was very welcoming and we just became a family and we stuck together for a long time. It’s just being apart of a team and being able to work together to reach a common goal.”

Bailey is one of four million cheerleaders in the U.S. with ESPN regularly showing events.

“Competitions were always my favorite part because we got to get all dressed up,” Bailey said. “It was exciting and I liked being nervous backstage.”

Most people watching or in the audience wouldn’t be able to tell as smiling is a requirement when cheering; but for Bailey, it’s not forced, it’s natural.

“I’ve seen her positivity go up and she’s encouraging the team more often and she’s just getting stronger as an athlete,” teammate Sam Roberson said. “She’s always happy. She just has a passion for the sport and she shows it through her tumbling, her energy.”

Bailey’s injury, bipartite patella, affects one percent of the population and is most common in males, making Bailey’s condition even more of a rarity. After surgery, the recovery process was far from easy.

“When she went back to school, they called it peg leg, her brace was set to where it couldn’t bend unless she was sitting down, but when she was up and walking around she had to have it straight,” mom Missy said. “She would go to physical therapy three times a week but with it was 10 months before she could do any of her tumbling or anything like that.”

Bailey had to overcome some fear in her return, but she wasn’t going to let her injury prevent her from pursuing her passion.

“It made me more scared to do the tumbling pass that I got hurt on but it also made me more confident once I got my skills back,” Bailey said. “When I was out, that’s all I wanted to do.”