Ford jumps to the top 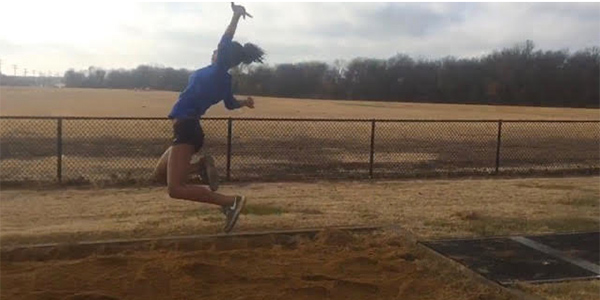 For the past eight years, junior Sanye Ford has held a love for track that has carried over into high school career, taking part in long jump.

Joining the track team in her freshmen year, it didn’t take sophomore Sanye Ford to make her mark with the varsity team.

“At our meet, it was the Heritage meet and I jumped a 17’6” and got first place,” Ford said. “I was excited because last season, my jumps got worse but this season they are getting a lot better.”

After weeks of practice with first place in mind, Sanye was ecstatic when her practice paid off.

“She was super excited to win and finally get the numbers that she wanted to get so it was very fun and rewarding,” mom Rhonda Ford said. “I was super proud of her because she had been working really hard to get that.”

After setting and completing the goal that she had for herself, Sanye has gotten serious about a future in track.

“I took practice more seriously and really focused on my technique and what I need to do,” Sanye said. “Instead of goofing off in practice and dancing with teammates I’d make sure I was focusing and listening to my coach and doing the right thing.”

Although she broke the school record last season, she plans on improving in hopes to beat her old record.

“I know she wants to get her distance back to where it was last year as a freshman so anything I can to help to keep pushing her and keeping her positive, she can do those things, she can reach those goals,” head girls track coach Amanda Byers said.

Typically, track is just during spring but this year, Sanye never stopped working.

“I know she has been working so hard and wants this,” Byers said. “She trained all last year and through the summer and then into this year so I know that’s a goal for her. I was excited to see her reach that.”

Working hard isn’t uncommon for athletes, but Sanye understands just how important it is now.

“I think just make sure I’m not so hard on myself and believe in myself more and then just remember my technique and what I need to do,” Sanye said.

While some people might not see the fun in competing in an individual event, it allows Sanye to hold herself accountable.