Non-district schedule winds down for volleyball 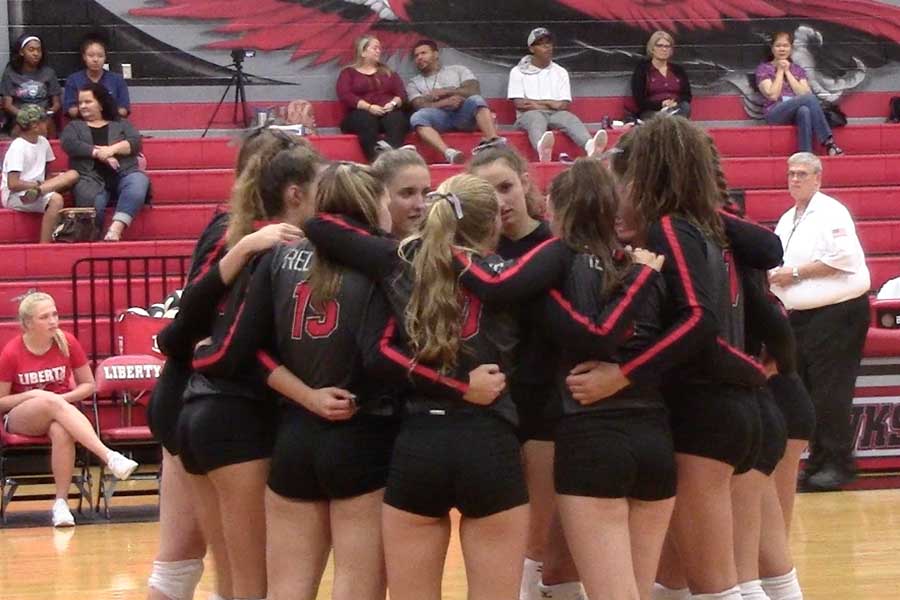 Facing off against Lewisville on Aug. 22, 2017, the volleyball team huddles during a quick break during the action. The Redhawks are back in action Tuesday when they take on Lewisville at home.

Practicing since Aug. 1 and playing games since Aug. 8, the volleyball team winds down its non-district schedule with Tuesday’s home game against 6A Flower Mound.

“I expect good high level volleyball,” head volleyball coach Ui Womble said. “We’ve got a good talented team, so I expect that to convert into wins and doing very well in our district competitions. I think we always want our goal to be district championship and I think we got the parts to be able to do that. It’s going to be a battle. We’ve got some really tough competition in districts.”

Most high school sports look to seniors for leadership, but for volleyball, age is not a factor with only three seniors on the team this season.

“Performance wise, I think everyone contributes to the team differently,” senior Kate Blasingame said. “Yeah, we have people that get the job done but everyone has a different role on the team and I think that’s what really makes us successful. Varsity takes on the role of being a leader to not only lead our own team but jv and freshman as well.”

Even though volleyball is well into its season, Womble has new goals for practice with District 13-5A play beginning Sept. 8 against Wakeland.

“Trying to be focused during practices,” Womble said. “We occasionally get off topic during practices so really working on keeping focus and getting to the goals that we have set for each drill or for each situation we are in.”