From the sideline to the spotlight 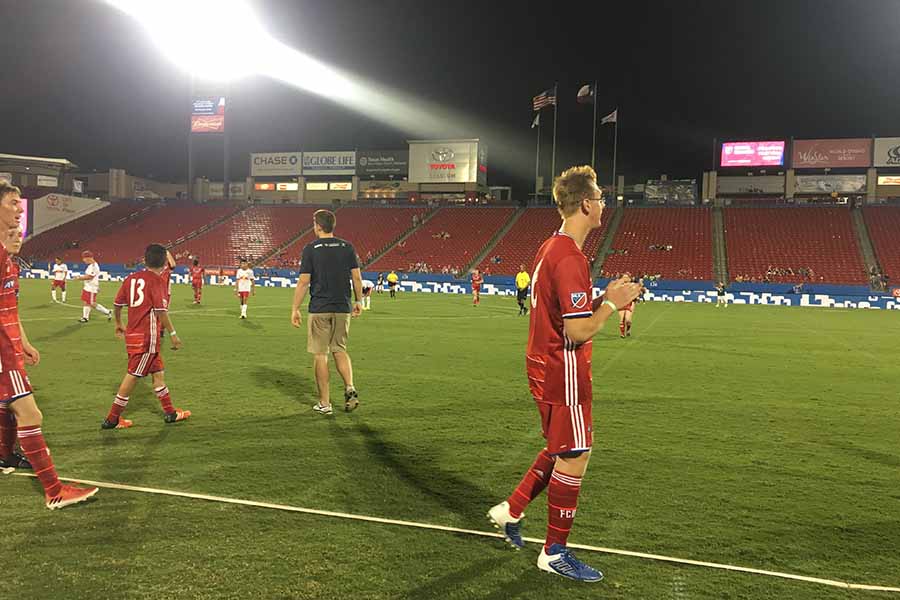 Boys' soccer manager Noah Mason suited up and took the field on Saturday, Sept. 2 in a game for the FC Dallas special olympics team.

Serving as the soccer team’s manager, Noah Mason doesn’t get to step on the field for the Redhawks. But on Sept. 2, he took to the field at Toyota Stadium as a player for the FC Dallas Special Olympics team.

“It’s awesome because I watch them every Saturday and I support them,” Noah said. “They’re my favorite club. They think that we’re friends and we can have a close relationship with them in coming years.”

For players on the FC Special Olympics team, the program offers social training opportunities and the experience of playing on the same field as professionals.

“This game it means so much to these players, they work so hard every Friday night this entire season for this moment,” Special Olympics partner Gracie Hunt said. “It’s so great because it’s not only a team bonding experience where we can lift each other up, but it’s also breaking all sorts of barriers that we put up whether that’s disabilities, socioeconomic backgrounds, or any of those things we are breaking barriers through sports.”

Among those in the crowd the Saturday, boys’ soccer head coach Fred Kaiser.

“It’s a lot of fun, he’s out there working,” Kaiser said. “He had a couple good shots, a couple good opportunities. It’s real cool. He’s the only Frisco kid out there so he’s representing all Frisco not just Liberty. He’s a huge FC Dallas fan so it’s a great opportunity to be a part of the club.”

Mason’s love for the game is reflected in the determination he puts forth to show that he can do the same things as anyone else.

“It’s just been good for his confidence,” mom Stacy Mason said. “To know I can do this too I can go out, put forth the effort, and have fun and be celebrated like he watches so many people.”

One of the perks of playing for the FC Dallas Special Olympics team, Mason is able to form personal connections with FCD players.

“I got to hang out with him for like two hours and got to talk about his favorite soccer players, his favorite soccer team and just kind of hang out,” FC Dallas player Coy Craft said. “He’s honestly one of the nicest people I’ve ever met in my entire life and he’s just easy going and laid back and super nice.”

After a couple years in the FC Dallas Special Olympics program, Noah has made his impact on the team and game.

“Noah’s great; his understanding and his game is fantastic,” FC Dallas Special Olympics coach Kyle Schroeder said. “He’s always playing the ball that you hope he’s playing and trying to get himself forward. We’ll be happy to have him back next year. He’s a great person. He’s always happy, wanting to get back at soccer, very passionate about soccer, knows every single player on the team, and really does a great job with integrating himself with our group as well.”