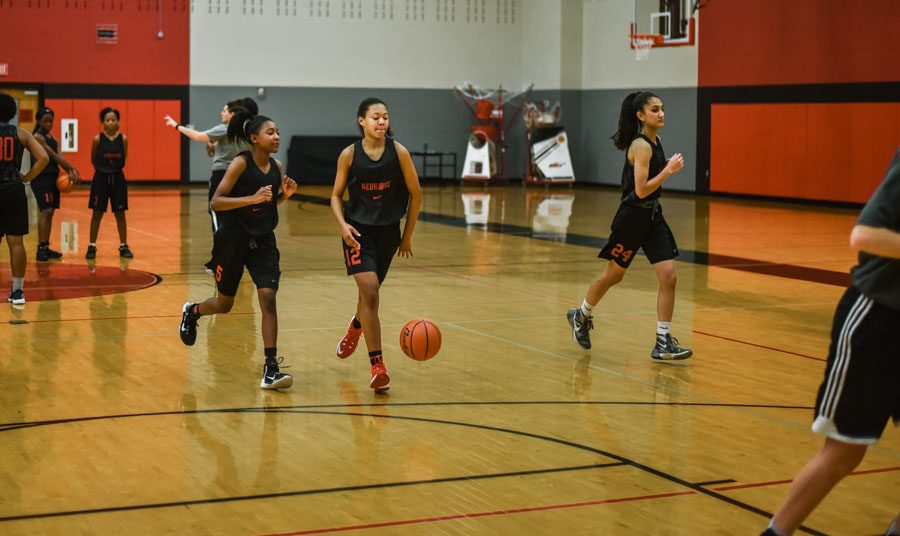 Running drills at a recent practice, the girls' basketball team, as well as the boys' team, will be practicing and playing over the Thanksgiving break.

The boys’ and girls’ basketball teams are kicking off the season with their own version of Midnight Madness Wednesday at 7:00 p.m. in the Nest. With the girls’ team tipping off their first practice last week, and the boys’ being able to hold their first practice Wednesday, the event is designed to pump up the community and the players for the upcoming season.

“In previous years, we’ve never done this which is great so we just start the basketball season,” head boys basketball coach Stephen Friar said. “Having this this year brings more excitement to this. It gets the kids excited it gets the people that want to come watch excited and that community feel that we want to have.”

Set up by the basketball coaches and the booster club, junior Alyssa Nayar hopes this will add a new energy to the season.

“It’s definitely a great way to bring in crowds,” junior Alyssa Nayar said. “I think that having this team bonding and all of the student section and all of the school coming out it’s going to bring a lot more anticipation and excitement for the upcoming season.”

“Really it’s just about the school as a whole, our school climate,” Reedy said. “One of the most difficult things in being a relatively young schools it’s building our transitions, building our culture and so this is just one of the efforts we want to do to ensure that that happens at Liberty High.”

From a dunk contest to a 3-point contest, players hope Midnight Madness gets the school excited for the upcoming season.

“With it being the first one I don’t really know how it’s going to turn out but I think it’ll help us bring more exposure to the basketball team around the school,” senior Zac Watson said. “We are doing a 3-point contest with the girls team, I think we’ll have some crowd games, and we’ll have a scrimmage.”