Neither love nor joy as Leopards end Redhawks volleyball season 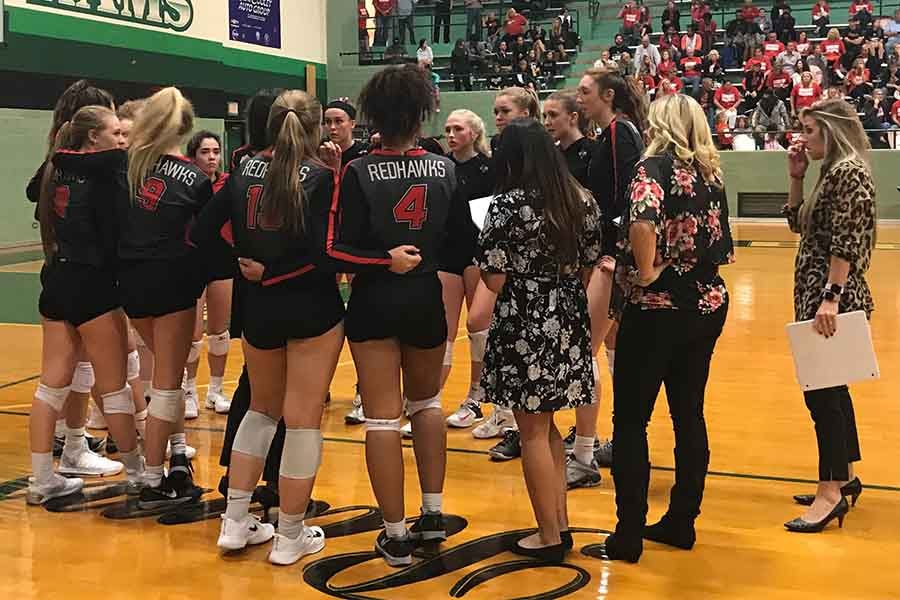 Facing off against 6-time state champion Lovejoy on Monday night in RIchardson, the Redhawks held a 2-1 lead before falling 3-2 and bringing their season to a close in the third round of the playoffs.

The volleyball season has come to an end after a close game in the 5A Regional Quarterfinals against one of top 5A teams in the state, Lovejoy. Losing the first set 25-23, the Redhawks were able to win the second and third sets before falling in the fifth game to lose 3-2.

“Last night we did really well, I was really impressed with how well our team did,” sophomore Jenna Wenaas said. “I think we definitely should have won the fourth set let alone the fifth, but at the end of the day it was still a really good game. We’ve been really thinking about it and we just can’t place our finger on what we could have done differently so I think we all walked away feeling like we gave it what we had.”

After barely falling short in the first set and losing to Lovejoy 25-23, the Redhawks jumped to an early lead in the second set winning 25-14.

“It was awesome,” sophomore Lauren Ransom said. “The excitement in the gym was crazy we really took their momentum away from them at certain points in the game so that was really exciting, it was just a fun game. I think they underestimated us. They weren’t expecting us to come out with such a bang so that really surprised them.”

The Redhawks carried the momentum into set three, winning 26-24.

“It was really exciting,” Ransom said. “It was good that we went to five with them because they’re a big competitor of ours and they’re really big. We fought really hard and did as much as we could and we couldn’t go out with a win but it was a good game to go out with.”