Rising to the top, West sets sights on state 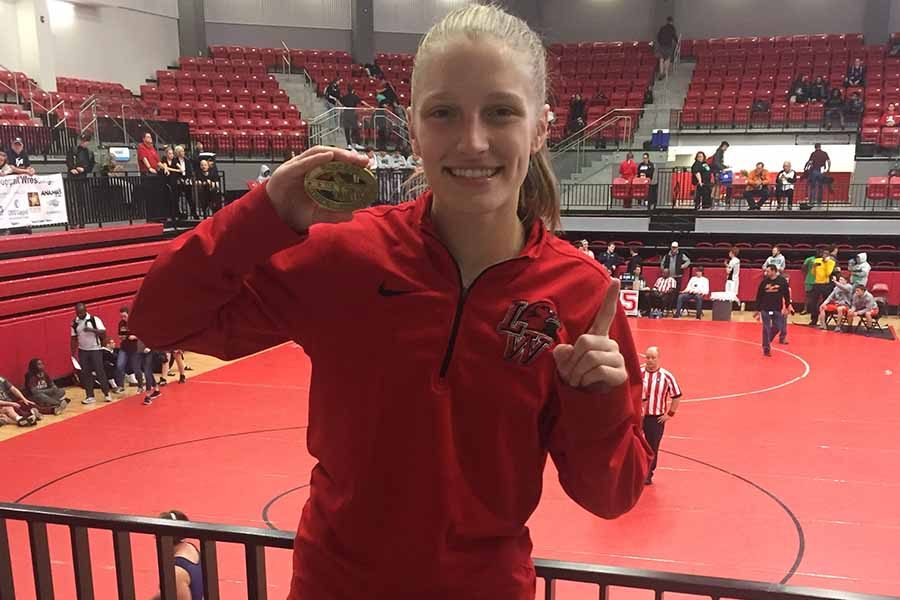 Holding one of her medals, junior Savannah West has four first place finishes this year and has her sight set on a run at state.

First on her radar in middle school, junior Savannah West has come to prioritize wrestling in her third year as she already has four first place wins this season with the latest at the Grapevine Duals on Saturday.

“I was at Fowler and the girls’ wrestling program came down to our athletic period and showed us what they did in practice and the kind of games they played,” West said. “I thought it was really cool. I liked how it was a one on one sport because you only have to count on yourself to win. It is also a team sport. You can win for yourself and you can also win for your team. I liked that aspect. I always considered myself a really strong athlete. I was really really competitive. Volleyball and track didn’t satisfy my competitiveness so wrestling kind of gave me the physicality I needed.”

Although the number of high school girl wrestlers has grown from 804 to 8727 since 1994, West credits some of her success to practicing with the boys.

“In practice, we lift 3 days a week and max out a lot,” West said. “In practice we go super hard, we work our drills and I like to wrestle some of the guys in practice because they are a lot stronger than me and that gives me a better look and gets me more prepared for the stronger girls that I wrestle especially with the more experienced girls I’ll see at state I can prepare for that by wrestling the guys in practice.”

Named a captain this year, West has strived to push everyone around her to work their hardest.

“I’ve known Savannah since we were little, we played on the same soccer team,” senior Ashtyn Stevens said. “Wrestling since my sophomore year, her freshman year. She helps out the wrestlers that don’t know as much as the varsity people so all and all she’s really helpful and very knowledgeable. We depend on her a lot with her points.”

Although West has suffered multiple injuries in the past few years, it has yet to slow her down.

“I’m super excited for her,” mom Tiffany Routh said. “I think it’s great. She’s been working really hard, she had a concussion last year. She hyperextended her elbow on two occasions once this summer pretty badly. She’s come back really strong and she’s doing super great. She’s very humble about it. The more and more she wins I think the confidence it there more and more. I think she wins with grace and I’m pretty proud of her for that.”

To most people wrestling is a sport, but for West, it’s also a social web.

“I think I’ve gotten a lot more outgoing,” West said. “The wrestling community is so friendly, ironically. I’ve gotten a lot of friends from other schools like Wakeland, Trinity, and schools from El Paso. I’ve met so many people. I have friends from Louisiana just from these national tournaments so I think I’ve definitely expanded my social aspect of my life. Wrestling has allowed me the chance to view the world differently because wrestling is mentally and physically challenging and if I have something that’s going wrong in life I can be like I’m a wrestler I’ve done much harder things than this I’m going to get through this.”

As a perfectionist, she has eyes set on a state championship this year.

“I always joke with her you could work for the FBI or CIA because she’s of the mindset of that I have to get this job done at all costs,” head wrestling coach Cody Bridwell said. “She’s such a hard worker, she’ll stay there and work and work and work until it’s done perfectly. Because of that attitude and that belief, there aren’t too many people that can give her a proper challenge. She’s going to not just be a good wrestler, but a great wrestler. We’re actually expecting some really good things when it comes around state championships.”

Focused on finishing her high school career with a visit to state, she won’t rule out continuing her athletic career in college.

“Girls’ wrestling in college is a different style of wrestling and I’m not exactly that type of wrestler,” West said. “I will definitely wrestle next year, my senior year, and I plan on going to state this year and next year I do plan on placing very high. For college, if a do get offered a big scholarship obviously I’m not going to turn that down.”