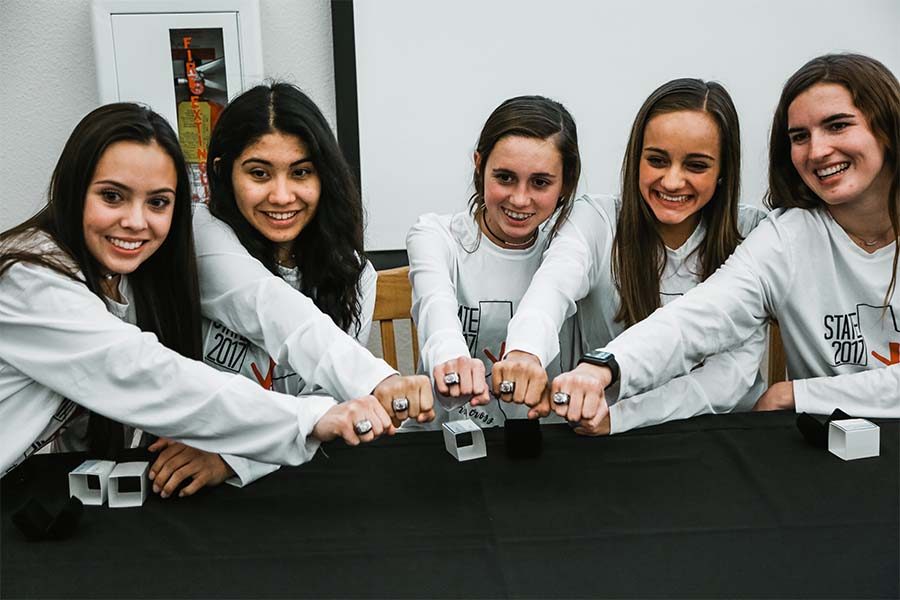 Receiving their 5A state championship rings, the girls' cross country team is the first in school history to win a state title.

After thousands of practices and hundreds and games, meets, and tournaments, the 2017-18 school year featured several standout athletic feats. Here’s a look at the top five sports moments of the year.

Entering the state meet as a championship contender, the girls’ cross country team made the trip to UT Austin on Nov. 4 hoping for a top three finish. But with senior Carrie Fish leading the way with a second place finish, and sophomore Amelia Jauregui finishing in seventh, the Redhawks brought home the school’s first UIL state championship.

In his last year on campus, senior Jiwoo Oh headed to UT Austin for the swimming state champions looking for a place on the podium. Heading into the final yards of the 100-yard breaststroke, Oh was vying for first place and with a final reach he touched the wall first, winning by .01 of a second to earn the school’s first individual state championship in swimming.

While in Cypress for the state meet, boys’ placed 3rd while the girls’ claimed 5th. Sending a total of 12 wrestlers, the team made school history with 7 of them placing. Just short of two points for the state title, junior Savannah West will have another go next year.

A frequent visitor to the state tournament, the Redhawks found themselves once again shooting for a state championship. Having rallied to finish 2nd at the regional meet, the Redhawks started slow in day 1 but were able to move up for a 7th place finish. Freshman Raeleigh Davidson led the team with a 78.

For the second year in a row, junior Nissi Kabongo and senior Carrie Fish advanced to the state meet. Fish finished 2nd in the 1600m and 3rd the 3200m and with Kabongo claiming 5th in high jump.