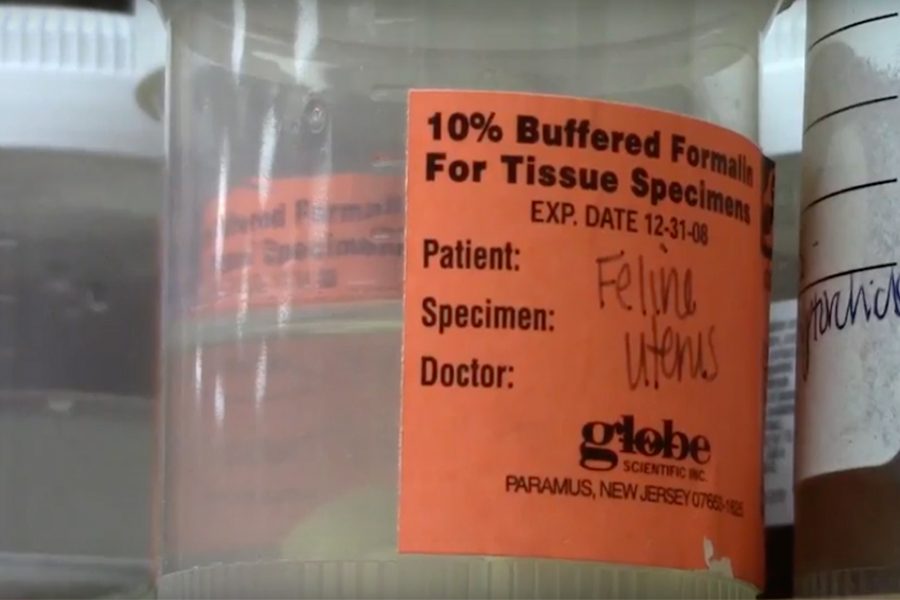 But like something out of a sci-fi movie, one teacher collects things many would say are strange and weird: the preserved remnants of animal body parts.

“So there’s a wide variety of things in the jars,” Anderson said. “I have testicles from dogs, cats and horses, I have uteruses and attached ovaries from cats and dogs, I have an eye that was removed from a dog and an eye that was removed from a horse, I have the tumor, I have the fetal pigs, puppies, I have cuterebra which are fly larva that are implanted into a dog’s face, I have, an ascaris or a roundworm, which are the most common parasite in puppies and kittens, and I think that’s kinda it. ”

The real showstopper, however, is what lies in the largest jar of all.

“One of my favorites is the black lab puppy that had difficulty on its way out of the birth canal and so they had to pull it,” Anderson said. “It’s in a jar, his name’s Shadow.”

Anderson’s shelf is full of these oddities: open for any students to come and inspect.

“Some people are really excited and eager to look at the jars and see what’s in there while some other students are absolutely disgusted and appalled,” Anderson said. “But most students, by the time they actually look at the jars and kind of see the things, they realize how cool it is and what they’re getting a glimpse of.”

“For me, it’s kind of like, you never get to see that stuff, and it’s like, ‘whoa’, it’s actually real,” junior Finn Hogan said. “It’s like, this is an eyeball, how cool is that?”

Not only is this a rare sight to see, but it also provides her students a glimpse of their potential careers.

“I think it gives our students that want to enter the animal industry a realistic interpretation of what kinds of things they’re going to encounter when they enter the animal industry,” Anderson said. “You know, people think it’s playing with animals and all the shine happy things that go along with it but there is some stuff that you have to do in the animal industry that you might not have necessarily thought about, like pulling puppies that are already deceased or pulling out fetal pigs, cutting out tumors, spays and neuters, you know, things like that.”