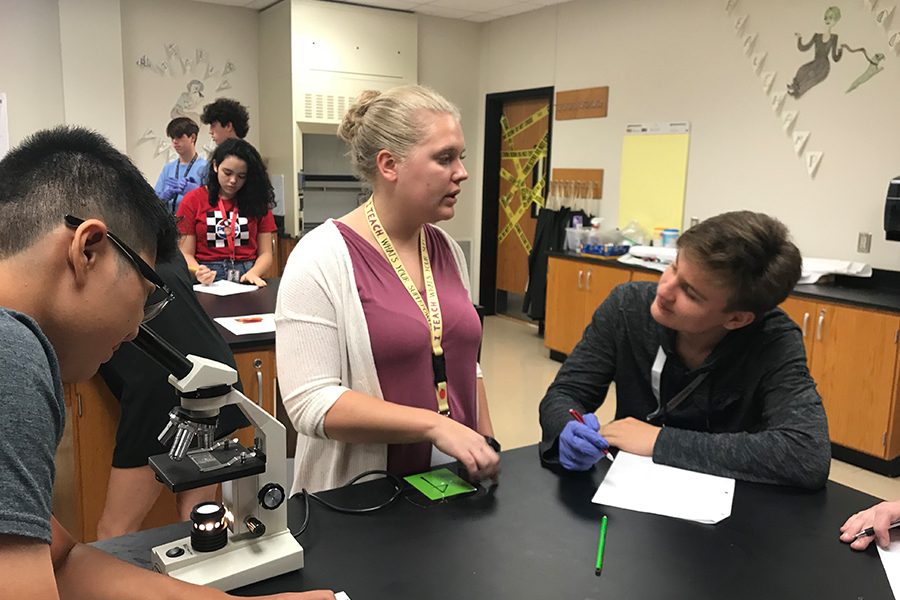 Students in pre-AP Biology classes such as those of teacher Kristen Newton are learning how to write a science based research paper over a health problem in today’s society.

After going through a long journey with many different jobs, a new teacher among many joins the campus to teach science after a lot of teachers left the school last year. Wingspan sat down with Kristen Newton to hear her thoughts and the new ideas she hopes to bring to Liberty.

Wingspan: So, what classes do you teach currently?

Newton: “So right now, I’m teaching Anatomy and Physiology. And then I also teach PAP Biology.”

Wingspan: What college did you go to?

Wingspan: Have you always wanted to teach?

Newton: “Kind of, I always like things related to teaching, like coaching, tutoring, and babysitting. It wasn’t until I was about three years into college that I realized that.”

Wingspan: If there was no aspect of teaching of some sort, what job occupation would you want?

Newton: “I would probably do something involved with writing, or something with publishing and writing.”

Wingspan: If you could pick one person, who would you say was most influential and inspiring to you during your journey to teaching?

Newton: “I’d have to say, my dad. Even though he’s not a teacher, he’s just very good at explaining things, and taking a really complex idea and just breaking it down. Seeing him doing that every day because he’s a doctor, I think influences me a lot and how I teach.”

Wingspan: So this is your first year, do you have any new ideas that you want to bring to campus?

Newton: “Yes, I really, really, want to try a project based lesson. And that’s where you take a whole concept and like right now in my biology class, we’re studying the organic molecules. You structure the class very differently. We’re working on one project with one outcome, but the students have a lot of freedom and how they study it. You would be learning all of those concepts that we’re supposed to be learning anyways, it’s just directed towards an actual situation where you’re solving a problem.”

Wingspan: When do you think that you’re going to be able to establish this idea?

Newton: “I think I’ll be able to get that in anatomy by the end of the year. Whereas in biology, y’all have that big EOC. So, it might take me a year to maybe get that implemented in my biology classes.”

Wingspan: What do you do when you have free time?

Newton: “I love watching Netflix. Hiking, walk on trails, I have a dog. He occupies a lot of my free time. And then, I’m really close with my family.”

Wingspan: So, I know it’s only been a short while, but what do you like the best, so far about working here?

Newton: “I would say that the kind of team directedness of the teachers here has been really awesome. I don’t feel like I’m left all on my own. Ever. As a brand new teacher, I have a lot of support and people working with me to make sure that I’m delivering content the best way I can.”

Wingspan: Putting aside being supportive, what do you think are the most important qualities for someone in your position?

Newton: “I think being flexible is very important. Because obviously being organized and having a plan is a good thing as a teacher, but you also have to be very okay with changing that plan.. That’s just how teaching and learning happen at different rates for different people.”

Wingspan: Would you say you have more of a fixed or growth mindset?

Newton: “I would definitely say the second. I think there’s always room for change. I don’t want to say I’m hard on myself, but I definitely challenge myself. None of us are perfect. You can always learn something new. Do it a different way, get better somehow.”

Wingspan: Did you have another job before this?

Newton: “I’ve had a bunch of weird jobs since I started college. I worked at a doctor’s office because I was kind of interested in the medical field. And then I trained at a facility in Austin, where they worked with professional athletes. When I moved back home to Dallas, I worked at a company called Stretch-n-Grow. And then I was worked as a teaching assistant at UTD while I was a grad student.”

Wingspan: What would you say is your biggest pet peeve and why?

Newton: “Biggest pet peeve is when people just don’t try. I can understand being frustrated and not doing something right the first time, but whenever someone just totally gives up on themselves. That makes me sad and disappointed. It’s when you quit trying that frustrates me.”

Wingspan: So, to this day, what is the accomplishment you’re most proud of?

Newton: “Most probably finishing a graduate level degree. I was really ready to be done with school, but I pushed through.”