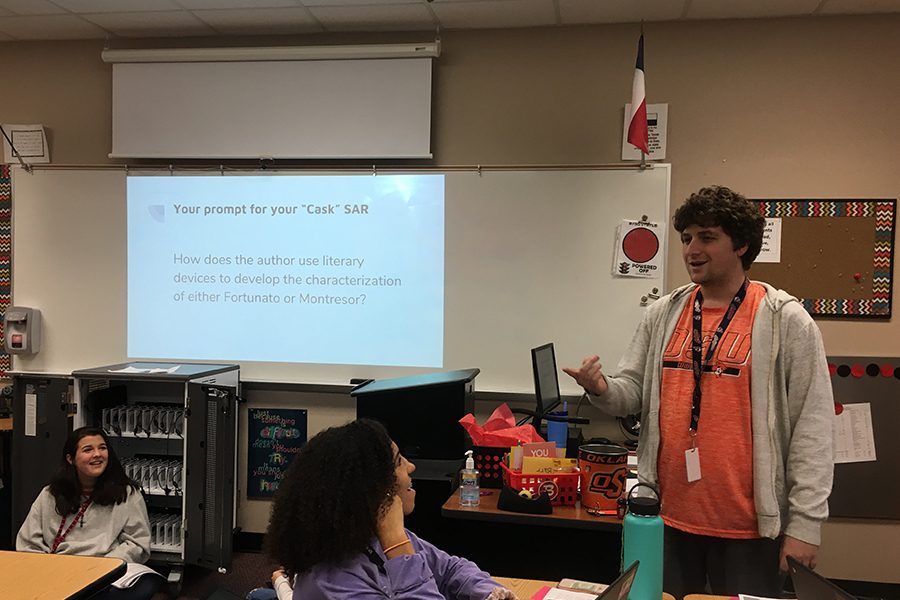 Beyond the more than 500 freshmen that are new to campus, there are also quite a few new staff members. One of those is Pre-AP and English 3 teacher David Barr who graduated from UNT.

Wingspan sat down with Barr recently to get his thoughts on being a Redhawk, his favorite books, and what he’s looking forward to the rest of the year.

Wingspan: Which college did you go to and why do you teach what you teach?

Barr: “So I went to Oklahoma State University and I majored in Sports Media. My last semester during OSU I decided I didn’t want to pursue a career in sports journalism and I actually wanted to become a English teacher. I picked journalism because I always loved to read and write and I love sports so I wanted to do both of those. However I realized I didn’t love sports as much as I thought. So, I went to the University of North Texas to get my Masters Degree in Teaching.”

Wingspan: What would you like to accomplish during this year?

Barr: “Yeah that’s a great question, I think my biggest thing I would want to accomplish is just to really establish relationships with each of my students. Even if English isn’t their favorite just to kind of encourage them to start thinking about what they love to do and just help them, talk to them and hear what it is they are really interested in.”

Wingspan: What is your favorite type(s)/ genres of books?

“Yeah, I mostly love to read fiction and love a good detective story, but I also love science fiction. Most of the books I read are kind of hard to classify, but definitely detective novels and science fiction as well.”

Wingspan: On the top of your head can you think of five books (that is not a series)?

Barr: “That are not in a series! Ok, my favorite books is this book called Snow Crash it’s about a hacker, its set in the future. There is another book called Motherless Brooklyn that’s about a detective who has Tourettes Syndrome. That’s really good. There’s a book called The Amazing Adventures of Kavalier and Clay. That’s probably my favorite book of all time! It’s about these two guys writing comic books right when comic books really took off in America. It’s a fiction story, but it’s based on the lives of the two guys who created Superman. It’s a really, really cool book. Then, so five, ok so two more. There’s oh no that’s in a series. The book I am reading right now is called Wonder Boys it’s about a guy trying to write a novel, he’s having a hard time finishing his book. It’s like two thousand pages long and he can’t end it. He has no idea how to get an end. The fifth book … this is so hard… I’ll say… there is just so many books. There’s a book called White Tears that’s about these two record producers in Brooklyn who end up being haunted by the spirit of blues music. It is really weird, but really good.”

Wingspan: How has has your past experiences shaped how you teach today?

Barr: “So, I was not a great student, but I always responded to teachers who engaged us in a way that that kind of beyond the subject. So, English was a good subject for me always it was fun because we got to talk about either real life or make connections to like movies we had seen. Things like that and that’s something I always want to try to do, use the creative thinking that goes with english encourage some interesting discussions that goes beyond just the books we are reading in class.”

Wingspan: What school event are most excited for this year?

Barr: “Great question, man I don’t know. I’m hoping to, I know a lot of my students are in band or orchestra. So, going to one of their concerts or something like that. I’ll definitely hit one football game, but I’d love to go to a concert. I was in band in high school and OSU as well. So, I’d love to see what Liberty is doing in those departments.”

Wingspan: Lastly, since you are new, what have you experienced so far that is different from other schools you’ve taught at?

Barr: “What I really love about Liberty already is not just that all the kids are so motivated but I love how motivated the staff is to help everyone out. Being new to the school there a lot of things about teaching that i’m just kind of new to. It’s so early in my career and everyone is so so supportive and just really want to help me become better and they are willing to take the time to think though that.”