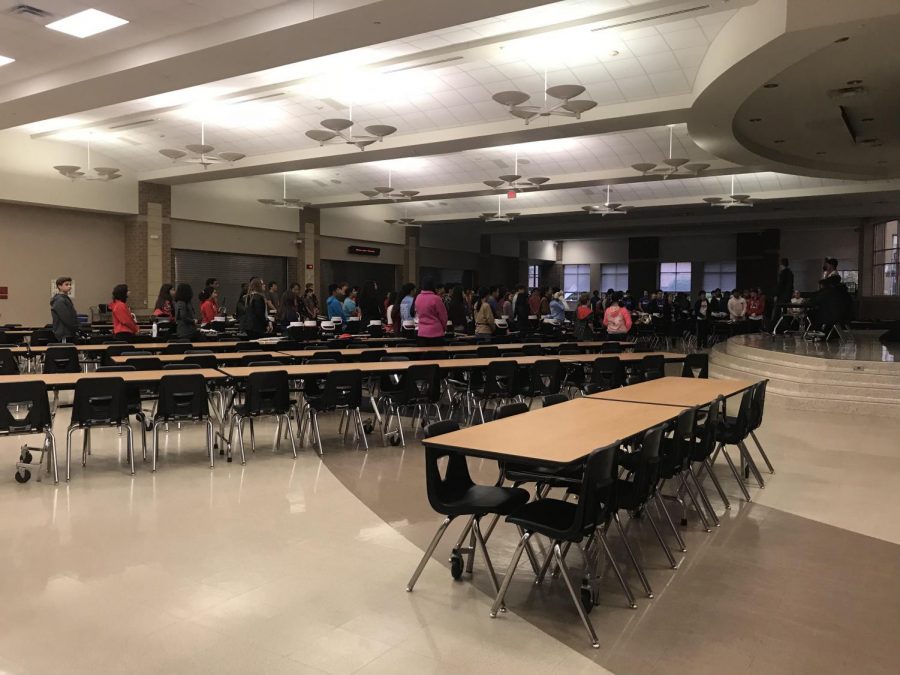 Band was forced to relocate their practice after school on Monday into the cafeteria due to harsh weather conditions outside as well as limited space on campus.

Rain along with some of the coldest October weather since 1898 is putting a damper on various activities on campus including getting to school on time.

After the bell at 9:00 a.m. signaling the beginning of first period on Monday, a line of students stood awaiting their probable tardy. However, taking into account the rain, office administrators voided tardies. With rain and chilly weather in the forecast until Friday, receptionist Lisa Negron won’t be surprised if this is the first of many.

“I see that happening anytime there is weather because people just don’t know how to drive in weather,” Negron said. “Things go wrong and people don’t give themselves enough time and busses break down and kids are running, all kinds of stuff. Everyone likes to give maybe the bus drivers an extra minute or two because of the weather for the students so everything gets a little backed up.”

Meanwhile, band with a UIL competition on Saturday, has no room for cancellations in practice and is adjusting by either playing in the rain or moving to other locations such as the field house and cafeteria.

“This year specifically, we’ve had more than we’ve had in the part four years,” associate director of bands Zach Anderson said. “We’ve had to kind of shift gears and go to plan B. It’s incredibly important that we look at the large scope of the season and going into UIL, it’s important that we keep everybody healthy as to make sure that our performance on Saturday is great. So we will still rehearse [on Monday].”

Tennis is as also witnessing the weather’s effects first hand as Tuesday’s afternoon playoff match was rescheduled to 7:00 a.m. Tuesday at Lifetime Fitness in Plano to take advantage of the indoor courts.

“It might a little but everyone’s excited about playing indoors because we never play indoors,” sophomore Yatin Pokle said. “It’ll be a very different experience but we are excited for it.”