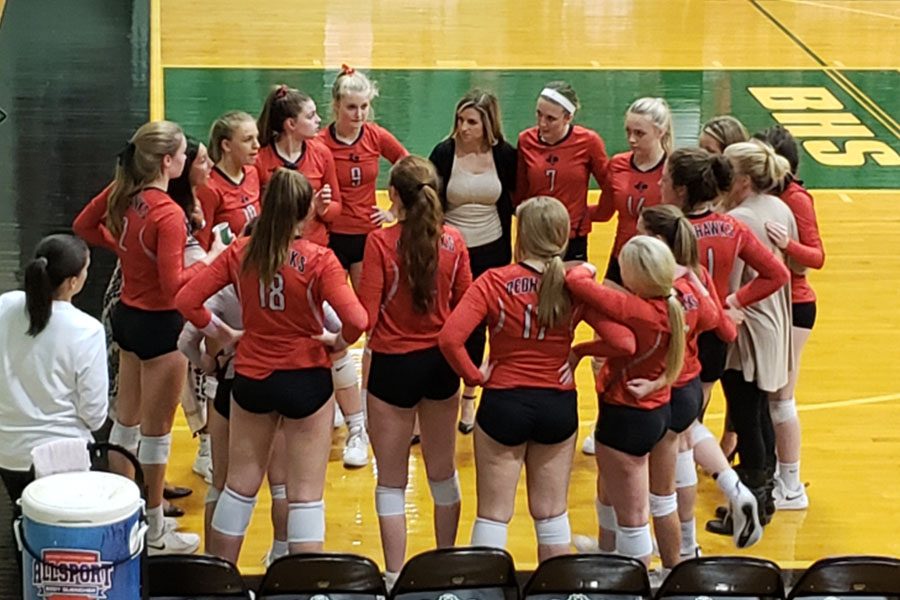 Déjà vu filled the court at Berkner High School, as the Redhawks’ volleyball season came to a close after falling to Lovejoy 3-1 in a defeat mirroring that of last year in the regional quarterfinals on Tuesday night.

“We wanted to get on the attack right from the beginning of the game and to make Lovejoy have to earn every point,” head volleyball coach Ui Womble said. “We didn’t quite start off that way.”

Instead it was the Leopards that jumped out to an early lead, taking the first set 25-14.

“Last year I feel like maybe we came in and took Liberty a little light,” Lovejoy head coach Jason Nicholson said. “They should’ve probably knocked us off the floor the way they came out and played last year, but this year we were a little more prepared for what they’ve got. Obviously, they’ve got a fantastic team.”

Falling behind early wasn’t what the Redhawks planned, but the team wasn’t ready to give up.

“We knew we had to keep fighting despite the tough first set loss,” junior Jenna Wenaas said via text.

And that’s exactly what happened as the Redhawks challenged the competition, bringing the match to a 1-1 tie after winning the second set 25-23.

Where set two gave hope to the Redhawks, it troubled the Leopards.

“Set two I was a little frustrated, I was probably more frustrated from the first 8-10 points where we just kind of let Liberty get into us a little bit,” Nicholson said. “And really I felt like it was a lot of our side of the net, some hitting errors that we made in set one.”

The third set mirrored the first as the Leopards pulled away for the 25-15 win.

“Obviously, set one we got a chance to set the tone,” Nicholson said. “Sadly, in set two, they clipped it on us, and it reversed on us a little bit. Luckily we fought back and were able to get our heads back in the game and not let that one bite us in the butt. Good volleyball on both sides of the net.”

With their season on the brink of being over, the Redhawks entered the fourth set needing a win in order to force a fifth and deciding set.

Crowds on both sides were cheering and jeering as the action went back and forth. However, with the score 18-18, the Leopards made a final push, and scored the win 25-21.

“I thought that we battled just like I knew this team would,” Womble said. “I thought that we got kind of rattled at a couple different points where we should’ve been able to get out of; some serve receive situations and some big block situations. I went into this game very confident and thought our kids did really good.”