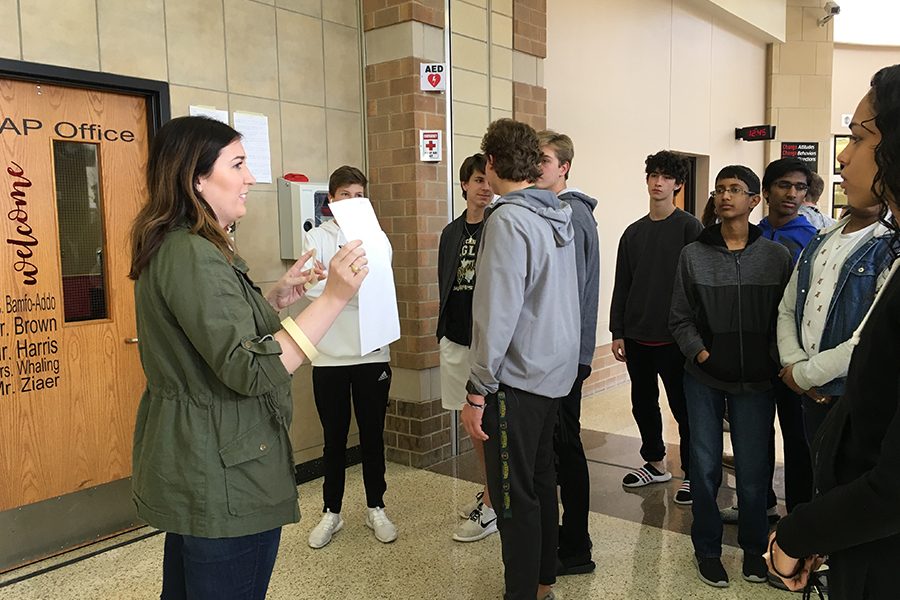 Ready to hang their Martin Luther inspired posters listing their problems with the Student Handbook, world history students listen as teacher Kristin Mayfield tells them what to do. The project was designed as a way to help illustrate what Martin Luther did with the Reformation.

Mimicking the actions of one of the world’s most well-known theologists, world history students posted a list of complaints in the front office about on the Frisco ISD student handbook Friday and Tuesday

“In world history, we’re teaching about the Reformation and the start of the Reformation was Martin Luther complaining about the abuses of the Catholic Church which he wrote down and called the 95 theses and he posted them on the church door in Germany so that the church could see the complaints,” history teacher Kristin Mayfield said. “We thought it would be fun to make it more applicable to our students to do something with the student handbook so they looked in a handbook and found 10 things that they thought were a problem and they wrote why they saw that as a problem.”

The project incorporated relevant problems to the students that helped them better understand the topics in the curriculum.

“It helped me because it helped me think of like a real world example, not just about the Catholic Church,” sophomore Kayla Girdner said. “So it’s something I can actually relate to with the APs and changes around the school so I can actually know what they’re talking about.”

This assignment allowed students to express their opinions on many school policies that are currently implemented and their opinions to improve them.

“I love this because it’s kind of like getting other people’s else’s opinion about the Student Handbook and I think it’s better for me to learn,” sophomore Anija Holmes. “We really wanted to have a mega lunch and be able to go off campus for lunch and be back in within the time period but I think we should that should be a privilege for us.”

Through creating a list of their own propositions, the students have the opportunity to shine light on ideas that they feel will benefit the campus.

“We looked through the Liberty handbook and anything we disagreed with, we would write down what it was and how we could change it,” Girdner said. “After that, we voted on whose flyer was the best and whoever’s won got to go in front of the AP office door.”

Beyond helping students better understand history, the project allows students to grow as citizens in the real world.

“By kind of putting a real world spin on it, it gets them a little more involved in the class and makes it stick a little more,” Mayfield said. “I think it helps them almost learn just to be good citizens and a way of reading the rules and expectations and if they see an issue with it, being able to challenge it, but in an appropriate manner and also just brings history to life.”