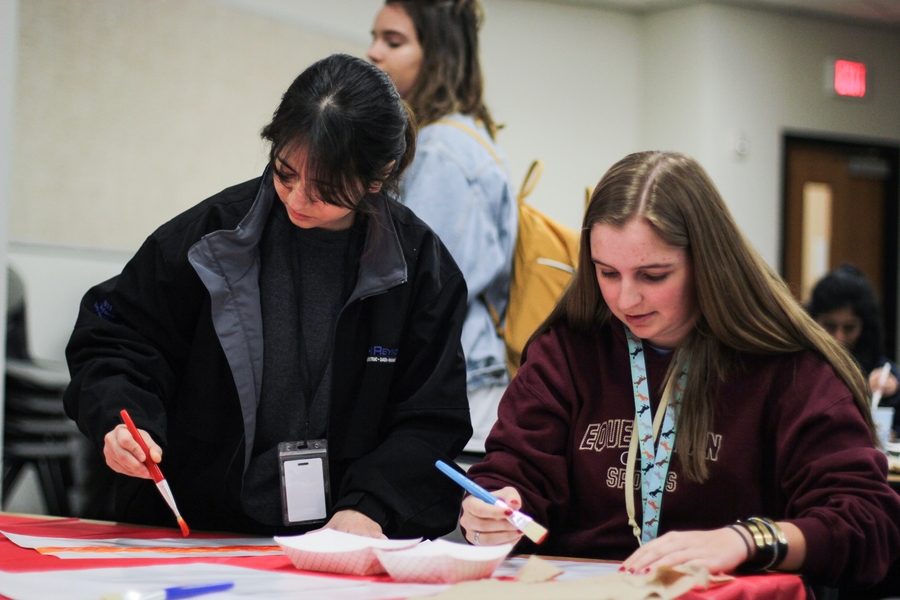 Students work on art during advisory at the Painting with Amelia event. During this event, students got the opportunity to relieve stress.

Artistic expression led to relaxation amongst students through Painting with Amelia, an event hosted during advisory on Wednesday that gave students that chance to create their own art.

“At the event, we had a whole bunch of stress relieving activities that had to do with art so we had coloring books, we had blank paper and colored pencils. We had paint and paint brushes and like larger pieces of paper, and then we also have play dough, so they were all art related activities,” junior Amelia Jauregui said. “It was just a lot of fun to be able to like have something to stress relieving during advisory.”

Students had the chance to escape from their busy schedules during the school day and use their time for making art.

“I just went because I I heard I saw posters on the in the rotunda and I just thought it’d be a good way to release stress because my classes were getting a little stressful and I figured it’d be an easy way to really stress during advisory,” junior Taylor Bullitt said. “I think it really well there was a great turnout and I heard a lot of positive feedback from it. A lot of people said it was just it was really fun and simple way to relieve stress.

Along with providing the chance to relieve stress, students were able to spend time with friends and utilize their creativity.

“I went with the friends and we had done it last year so we just went we play with play dough and we painted some scenery,” sophomore Sofia Calderon said. “I think it went really well because last year it was really fun because you went with friends and stuff there’s just something to chill out with during advisory.”

Painting with Amelia provided a calm space for students where everyone has the chance to get involved.

“I host usually a stress relieving activity at the end of each month as a part of Pulse and it’s something that I look forward to every month,” Jauregui said. “Normally we do yoga but we wanted to try to switch it up and do something else that would be a little more engaging to people and might attract more people so we decided to do art because a lot of people, whether you’re a really good artists and you’re in AP art, or if you’re someone who just like wants to have fun, it’s something for everyone.”