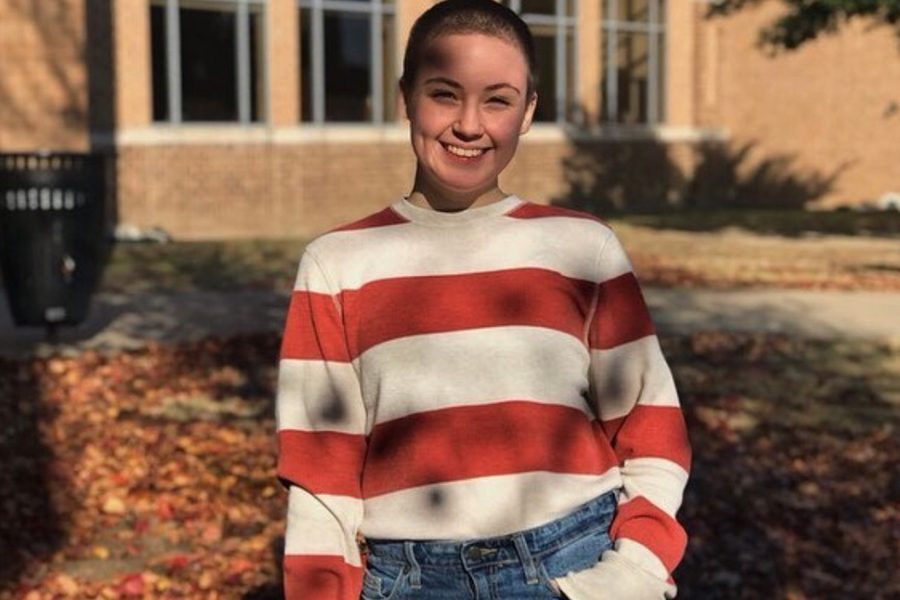 Hoping to bring a new perspective for people outside of the community, junior Maddie Aronson talks about her journey to finding acceptance within herself and others. Although she has come a long way on this path, she believes that it is a life long experience that is just beginning.

June 25, 1978, openly gay artist and activist Gilbert Baker hoisted the first ever rainbow flag at San Francisco Pride. 30 volunteers hand stitched and dyed the fabric, and created a symbol that represents the same ideas now as it did 40 years ago: equality, love, and individuality. Today, many people around the world, including myself, have their own flag, as a daily reminder of the people in the community before us, and what they have done so we can live everyday as prideful as we possibly can. While the modern world is leaps and bounds ahead of Baker’s day equality wise, not every aspect of life is easy, by any stretch.

The first time I ever considered that something could be different about me was in elementary school. Most 4th grade girls talk about crushes and what boys they got to hug that day, but I had no interest. For years, I just chalked it up to the fact that I was younger and just hadn’t started to develop crushes yet, but at some point in middle school, I began to learn about the other options out there. Some of my friends began to come out as bisexual and gay and that really got me thinking about options that I could learn about and explore as I grew.

7th grade was the first time I had ever said out loud that I was questioning my sexuality. At the time, I didn’t definitively know that I was gay, I initially came out as bisexual. For some reason, the leap from straight to bi was less of a transition, because if I found out I was wrong, I could much more easily transition back.

I very distinctly remember, in 8th grade, at two in the morning, I sat at my desk staring at a blank piece of notebook paper, attempting to write my mother a letter telling her I was gay. I wrote 6 drafts, but each piece of paper ended up crumpled and thrown away, because I felt that I just couldn’t say it right. After writing and trashing multiple drafts, I went down stairs, woke my mom and just said it. I told her as bluntly as I could that I thought I was gay. She said that she loved me, and this was not despite my gayness, but including it. She said we could talk about it in the morning, which we did. I had never been so relieved to get something off my chest. This was the first major step I took in finding myself, and this set me on track to really grow to love and accept every part of my self. This was my first major step in the right direction.

Within a year of coming out to my mother, I told my father at Pei Wei over a large bowl of teriyaki chicken and rice that we had split. I waited and waited for the right time to say something, but since a golden moment never appeared, I decided that night was as good as any.  When my sister got a little older, I told her during a game of cards at my grandparents house, late at night. As I started to grow in confidence, and meet other people in the LGBTQ+ community, I began to tell my friends. A few were excited, some were confused, and some were not interested in being my friend anymore because of it. The variety of reactions was astounding to me. But of course, I didn’t really know what to expect, I had never done this before.

I consider myself extremely lucky, as the most important people in my life have been supportive, accepting, and nothing less than absolutely loving, but as I came out, I had to recognize that not everyone would be so comfortable with who I was. I’ve gotten called demeaning names by people I once called friends, and had embarrassing rumors spread, and while this was tough, I did my best to recognize that it could have been so much worse. Understanding and accepting that some people couldn’t be involved in my life because of an innate part of who I am was difficult to come to terms with, but at this point in my life, I am surrounded by the most wonderful people anyone could ask for.

Flash forward to now, my junior year, and I am the president of the Sexuality And Gender Acceptance (SAGA) at school, I have a girlfriend of 10 months, and I’ve never been happier.

I’ve come out to almost all of my extended family, and have made it a personal goal of mine to use my position in SAGA to help anyone and everyone live as openly and as comfortable as they can. I pride myself on being well informed on the topics of gender expression and sexual orientation, and I do everything I possibly can to learn and inform about and the people and culture of the LGBTQ+ people and community.

Being gay has come with an array of challenges, like accepting myself, accepting the world’s view of me, and people like me, but even if I could change my sexuality, I never would. Being in the community has been one of the most fulfilling and eye opening experiences I could have, and I’m loving every minute of being prideful, unapologetic, gay teen.