Cultural attraction: more than a coach 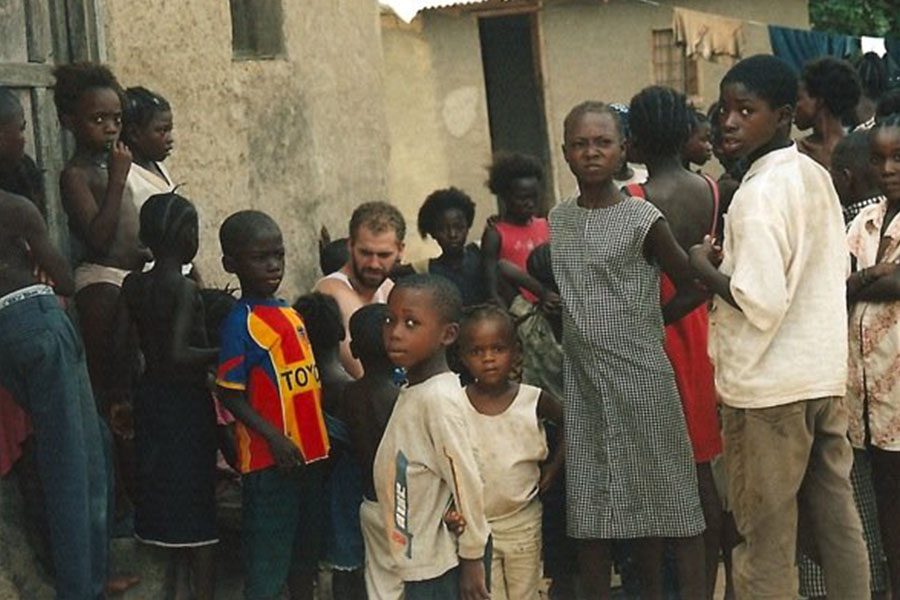 Surrounded by children outside of a hospital for leprosy in Ganta, Liberia, girls' head basketball coach Ross Reedy spends part of each summer traveling the world trying to learn as much as possible regarding the world's different cultures.

Entering the UIL 5A state semifinals on Thursday against Kerrville Tivy, Ross Reedy has helped the Redhawks maintain their status as one of the top 5A teams in the area. In his five years as a head coach, Reedy wins nearly 80 percent of the time.

Calling out orders on the court may be what he’s known for, but there is another side of Reedy that most people on campus don’t know about.

From Zimbabwe to Bosnia and Herzegovina, Reedy often travels the world each summer trying to quench his cultural thirst.

“As much as I’ve appreciated education throughout my life as an educator and learner, my travels abroad opened my eyes to the realization that I still had so much to learn about myself,” Reedy said. “Some people are adrenaline junkies. Some people like to go fast or they want to raise a family or whatever it is, but for me, my passion has always been people and their cultures.”

Coaching and teaching at one of the district’s most diverse schools, Reedy is more than a basketball coach to players such as 2017 graduate and current University of Tulsa guard, Rebecca Lescay.

“One of my favorite features of coach Reedy is his love for all cultures,” Lescay said via text. “He would share all his experiences and give life long advice. From my experience, I believe that there’s more to life than basketball, and Reedy really emphasized that through his personal experience. Through his travels and all, he taught the importance of friendships and relationships.”

The son of former Frisco ISD Superintendent Rick Reedy, Reedy grew up in Frisco, but his worldview has long extended beyond north Texas; his quest for travel spurred by his mom, Judith, who led international mission trips for a Methodist Church.

“Ross and I have a close relationship,” Judith said via text. “We travel well together because we do not have to know everything we are going to do and we are not upset by interruptions or obstacles.”

For Reedy, this often means embarking on a trip with a open itinerary.

“It’s cool because when you go places people see what you’re doing, develop a genuine intrigue, and they want to help you,” Reedy said. “That’s what’s crazy about people… If you really give them a chance, people want to lend themselves to you, especially in poverty stricken places. When I’ve gone places, you couldn’t possibly plan what’s happened to me. You couldn’t put it on an itinerary; it just happens.”

Straying from the big cities and tourist attractions, Reedy ventures to unpopular locations to soak in the full experience of living in a small village in places such as Latin America, Europe, and Africa.

“This past summer (2017) he just disappeared to Europe for five weeks. I would check in with him every week or so and he’d be in a different country doing something different and it wasn’t tourist things,” social studies teacher Jay Sommers said. ”I texted him one time and he was in Sarajevo which is not a tourist destination and he just has friends all over the world and his interests are just wide ranging.”

Thursday night, Reedy’s focus will be a bit more narrow as tries to help the Redhawks advance to the state final for the second time in four years. But when summer rolls around, former assistant girls’ basketball coach Rochelle Vaughn says Reedy lives something of nomadic experience.

“Whatever he’s doing he’s all about being in the moment,” Vaughn said. “So he’s coaching basketball, that’s all he thinks about, like he focuses on the girls. But in the summer time, he takes like six weeks and goes wherever the wind blows him. He likes to get away and be in that moment at that time.”

Alone and without a plan in mind as he travels the world, Reedy aims for personal moments that set him up for different cultural experiences that can’t be captured on an agenda.

“You just be, you just walk,” Reedy said. “You stop at people’s houses. If you go anywhere in most African and some Central American nations, they want to feed you. Everything is over a
meal or a cup of tea at the very least. You just hear everybody’s story. You hear the story of the town.”

Having visited more than 20 countries on four continents, Reedy’s job as a basketball coach and teacher is more than a means to an end as he seeks a global understanding of people while trying to find his place as a person.

“As we go through this life I want to examine and explore every little aspect of the planet as much as I can,” Reedy said. “But I also want to have that same experience on the journey inward in understanding who I am and how I make sense in this big thing, along with my relationship with people, how I may impact them, and, just as significantly, how I am impacted by others.”

This story was first posted on Feb. 20, 2018 but has been updated to reflect current events.