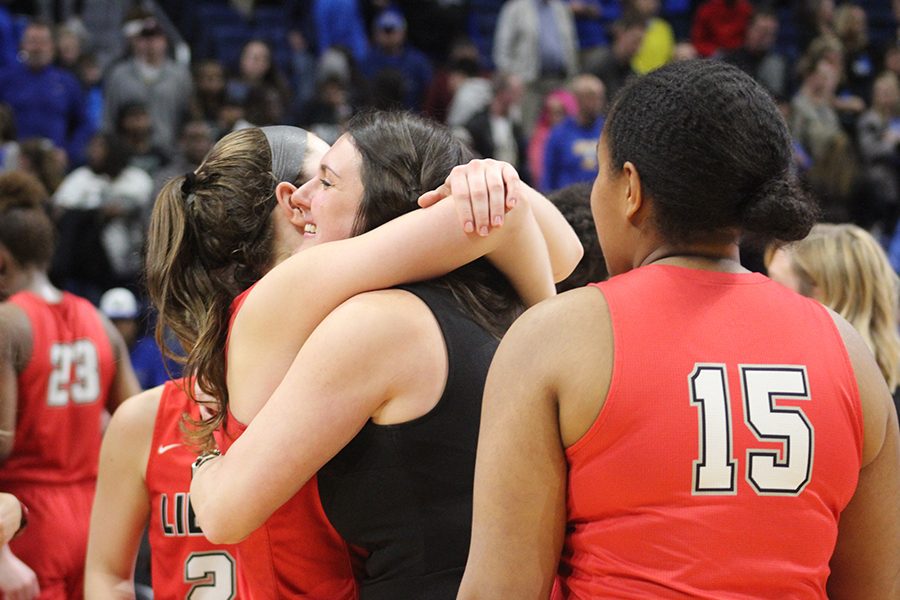 As senior Brittany O'Reilly-Ward (#15) looks on, assistant coach Kristin Lynch hugs senior Kelsey Kurak after the Redhawks secured a place in Saturday's 5A state championship game against Amarillo. The Redhawks got there after beating Kerrville Tivy 34-28 on Thursday, Feb. 28, 2019.

As the clock struck :00 on the UIL 5A semifinal game against the Kerrville Tivy Antlers on Friday at the Alamodome, and the scoreboard showing the Redhawks taking the 34-28 win, the celebration was somewhat subdued as the team knows their ultimate goal still sits 32 minutes away in the championship game Saturday.

“We are obviously elated to be in this situation,” head basketball coach Ross Reedy said. “The other team made it hard for us being really happy throughout because they put us in a really stressful situation.”

It didn’t start off that way, as wasting no time, senior Randi Thompson, hit a three-pointer in the first 30 seconds of the game, followed by another one from senior Mara Casey as the Redhawks jumped out to a quick lead.

“We’re definitely super excited,” senior Randi Thompson said. “We kinda had a feeling we were going win the game but just the fact that we actually won is very exciting.”

Especially since the Antlers eventually pulled themselves out of the early hole and tied score the at 27 with 6:00 left in the fourth quarter.

Struggling to score, the Redhawks went more than 12 minutes without a field goal until senior Kailyn Lay drove the lane and hit a layup while getting fouled. Making the free throw, the Redhawks led 30-27.

“It felt really good,” Lay said. “I know throughout the game it was like a close game so we were just thinking like ‘we have to finish the game and come out with a win.”

Giving up only one point the rest of the way, the Redhawks secured their second championship appearance in the last four years where they face a familiar foe: the Amarillo Sandies.

“We’ve seen Amarillo before,” Reedy said. “They beat us in overtime and so we’re really excited to be able to play them in the final and get the opportunity to get state championship for Liberty.”