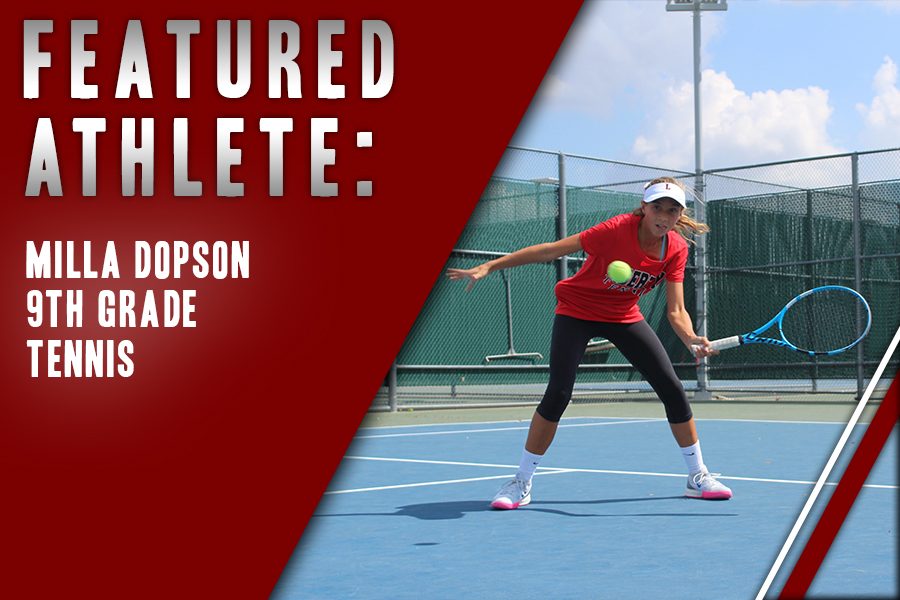 Freshman Milla Dopson is a fresh face on the varsity tennis team. The sport runs in the family for Dopson who is looking to climb the state ranks throughout high school.

Wingspan: How long have you been playing tennis and what inspired you to start?

Dopson: “I’ve been playing tennis for about five or six years and what inspired me was my dad used to play tennis and he played in France and he was like top 500 in the world so like I really wanted to be like him and my mom also played tennis so I just kind of grew up around the tennis environment.”

Wingspan: What is your favorite memory from tennis?

Dopson: “I have a bunch of memories from tennis. But probably my favorite time is when you just hit a clean winner and they just can’t get to it.”

Wingspan: What’s the most challenging part of being a part of varsity tennis?

Dopson: “The most challenging part is handling your nerves because everything counts, like every match counts towards your final total for your team and you just don’t want to let your team down.”

Wingspan: What fuels your passion for tennis?

Dopson: “I just like that tennis is an individual sport so like if you lose you just know what you have to work on. In tennis even though there are lots of losses you still get to learn from those losses. You can know what you can do better in the next match and you can keep improving. It’s cool to see your improvement as the year goes on.”

Wingspan: How do you prepare for matches?

Dopson: “How I prepare is that I make sure I have Gatorade, towels, extra rackets, just in case I break my strings, and you also want to research who you’re playing. So if I’m playing someone like that has played my friend before I might text my friend, saying like ‘Does she hit more lobs or does she hit more flat? Does she come to the net?’”

Wingspan: What makes tennis different from other sports?

Dopson: “Tennis is different from other sports because you’re not that much in a team, you’re more individual. And it’s not like you have to score a certain amount of points. It’s just you need to use a lot of strategy to where if you want to hit the ball long, or if you want to come to the net, hit a drop shot. You just have to learn a lot of different techniques. You also have to know how the scoring works and there are just a lot of different elements to tennis that is just different from other sports.”

Wingspan: What is something you want to improve on?

Dopson: “I really want to improve on coming to the net and being more aggressive. And when I come to the net, hitting a great approach shot where I can just finish out the opponent with a clean winner ball.”

Wingspan: Are you planning on continuing the sport in the future?

Dopson: “For sure. I really am passionate about tennis. I do think I’m going to continue in tennis. Even though I used to play tons of sports, I realized that tennis is the sport I love. What’s really fun is that the higher you go, sooner or later, you will get ranked in tennis, and now I’m ranked in Texas so now I want to get my ranking higher in Texas. So you just want to keep getting your rank higher, to like the highest in Texas then you want to start upping your rank nationally and you just want to keep getting better and better and better.  So I just want to keep continuing the sport to get as high as could go and the best that I could be.”

Wingspan: What is your ranking right now?

Wingspan: How does the ranking work?

Dopson: “The thing about ranking is that it does matter how many people you beat like I have beaten someone that is 50th in Texas, which is really good for me and I’m really happy about it but I have also lost a lot of matches. So I do want to get my ranking higher.”