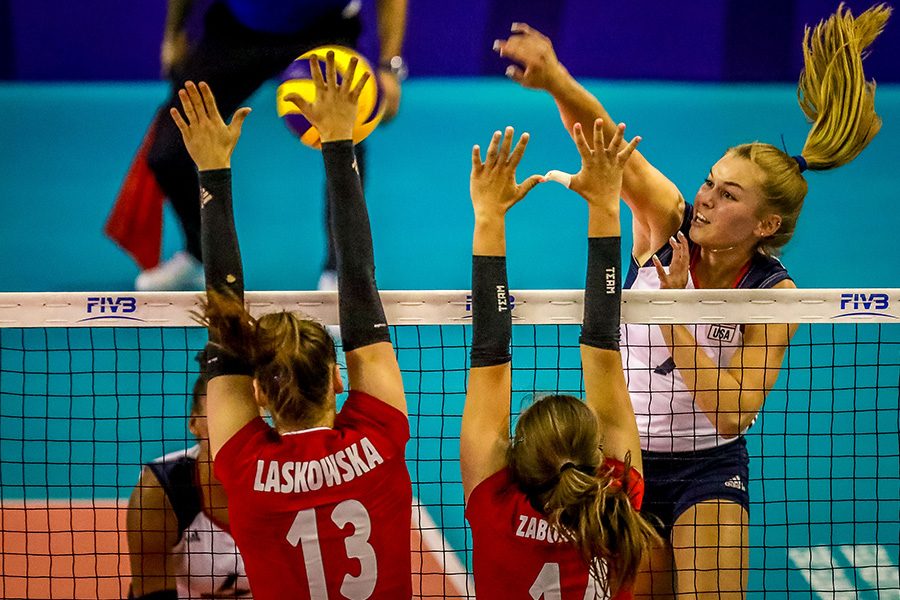 Already considered amongst the top volleyball players in DFW, senior outside hitter Jenna Wenaas received a stars and stripes invitation over the summer as she was one of 19 girls asked to try out for the US Junior Women’s National volleyball team.

Traveling to Colorado Springs in July, Wenaas endured several days of practices, before finding out if she would be one of 12 to travel to Mexico for the 2019 FIVB Women’s U20 World Championship

“We tried out for four or five days, and on the last day we found out if we made it or not,” Jenna said. “I was excited, I wasn’t sure how it was going to go. Then when I did make it, it was reassuring, and kind of felt like an affirmation on my skill, and my ability.”

For head coach of the WJNT, University of Texas’ Jerritt Elliot, choosing the final 12 that would make the junior national team wasn’t easy.

“All the athletes made the cuts very difficult for our staff, it was hard, but I’m proud of all the girls who came in and gave us great energy,” Elliot said in a Team USA news release. “From the moment the girls came together their personalities clicked and became a committed group very fast. Our staff has really enjoyed this talented group’s personalities.”

The Redhawks coaching staff has similar thoughts on Wenaas as head coach Ui Womble has seen first hand the work her senior leader has put in.

“I think that she has worked really hard, she has put in a ton of time, energy and commitment,” Womble said. “She is a very gifted as an athlete, so that helps out, but you can’t have just that, you have to have the talents plus the hard work and commitment to be able to succeed at that type of level.”

Jenna’s mom, Paige Wennas is proud to see her daughter perform at such a high level, and seeing all of her hard work paid off.

“I think this was an excellent opportunity for Jenna to peek into her future as she sees it right now,” Paige said. “This experience gave her a taste of what playing elite- level sports internationally feels like,” Paige said. “I was beyond happy for her to know that all her years of hard work and dedication not only got her to such an elite level but allowed her to thrive while there.”

The experience not only helped Jenna build her volleyball IQ, but gave her insight into the world of volleyball, and international life that she had never seen before.

“I met a lot of new people who I’m friends with and keep up with from all over the country, and also I think it was just cool to play internationally,” Jenna said. “I’ve never done that before, so just learning what volleyball is like in other countries, and seeing how other people interact with each other, on and off the court, around the world.”

Womble hopes Jenna’s summer experience will pay off this fall for the Redhawks team as they seek to defend their District 9-5A championship.

“I hope is that her help with the other kids in the programs through modeling the behaviors that it takes to be successful, and just sharing her experience, and what it was like to play at that level,” Womble said. “Also, the things that she picked up form the national team coaches, and the training that they did, hopefully, she’s able to share that with everybody.”

Committed to play college volleyball at the University of Minnesota next year, Jenna’s summer experience could pay dividends for years to come.

“Now I’m in the USA pipeline, so if I wanted to go to the Olympics or play pro I can use this for my volleyball resume kind of thing, I can say that I was a part of this,” Jenna said. “Also, I think it made me a much better volleyball player.”