Back where it all began, Parks returns home as a pro 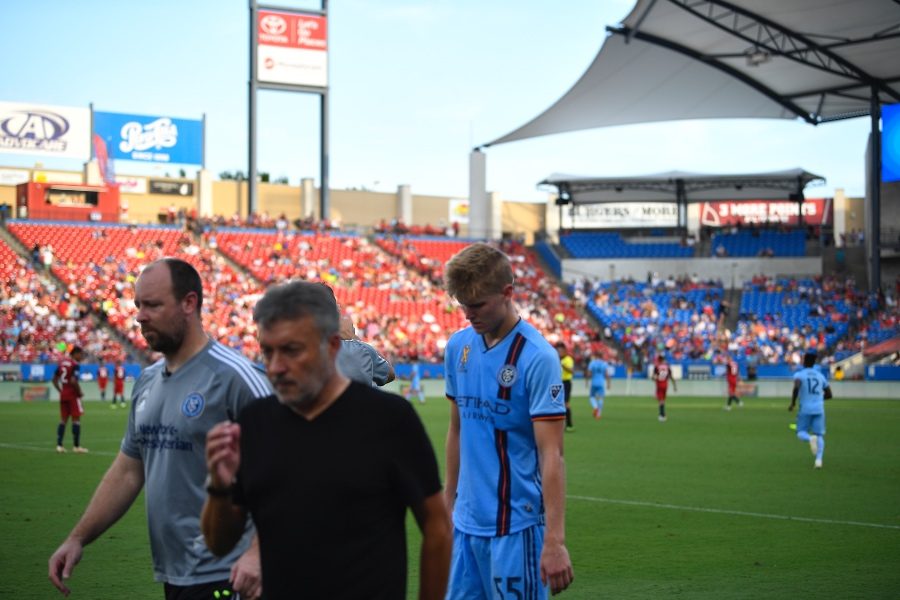 Getting injured in the second half, former Redhawk Keaton Parks exits the field and makes his way to the bench with a possible hamstring injury.

It was a sense of deja vu for NYC FC’s Keaton Parks on Sunday. A 2015 Redhawk graduate, Parks took to the familiar pitch of Toyota Stadium, trading the red and black of his high school days, for the light blue of his young professional career.

Playing numerous games on the same field as a Redhawk in high school, Keaton returned for a match against FC Dallas a little more than four years after graduating.

“It was exciting,” Keaton said. “I’ve been to a lot of games here and I grew up around this area so it was exciting to be back and see all my friends and family out here. I always dreamed of it. I always wanted to play professional soccer. Playing in my home country would’ve been awesome so I always hoped that I would.”

All eyes were on Keaton with friends, family, and former coaches surrounding him.

“It was overwhelming honestly,” sister Kaci Parks said. “I really enjoyed it. I don’t get to see him play that much, but it’s easier to see him now because he’s in the states. It is one of the coolest days ever. When he was in high school he was pretty small and he wasn’t one of the star players I wouldn’t say. Now he’s way better basically he grew a foot and that gave him an advantage over everyone else.”

However, Keaton’s game was cut short, as he suffered a hamstring in the 65th minute.

The game began with a goal by NYC FC’s Valentín Castellanos in the opening minute, but FC Dallas tied the game in the second half. However, neither team would score again, with the result ending in a 1-1 draw.

Starting his professional career in Portugal for Varzim SC in 2015 and later signing with Portugal’s top club Benfica in 2017, Keaton sharpened his skills in Europe before transferring to MLS on loan from Benfica earlier this year.

“Every team and every game has helped me develop the player I am,” Keaton said. “Playing with Benfica and some of the top players in the world really helped me develop my game and learn with a lot of experienced players and all of that has gone into how I play here in New York City.”

“First and foremost, he’s a good person and he fit into the locker room,” teammate and NYC FC goalkeeper Sean Johnson said. “He brought a good energy with him and he’s a really talented player as well, so you add a quality piece to a team that was strong and he definitely complimented what we had and we are happy to have him.”

Watching him transform as a player over the last eight years, Redhawks boys’ head soccer coach Fred Kaiser has had time to reflect on just how far Keaton has come.

“His game was always really solid,” Kaiser said. “The biggest thing for him was his growth. He grew over a foot from his freshman year through the time he graduated. So he went through a couple little hiccups as he went through those growth spurts. Once the growth spurt had stopped, and he grew into his body, he was even better than before, because he had the same foot skills and the same ball control and the same vision, he just had a much larger frame.”

Starting 14 times for NYC FC in the MLS regular season this year, Keaton has made a name for himself in MLS, paving the way for potentially bigger things in the future according to his teammate.

“The future is very bright for him,” Johnson said. “I think the sky’s the limit. He has the potential to play a really really high level and it’s really up to him. He’s got the right mindset up to now. He’s approached this year with the utmost professionalism. So for him it’s just continuing to work hard, keep his head down and push the envelope.”

Meanwhile focusing on his time with NYC FC, Keaton knows what it will take to make it to the next level.

“Just have to keep working,” Keaton said. “Keep listening to my coaches, keep learning from more experienced players try to put all that into my game.”