Clash on the court 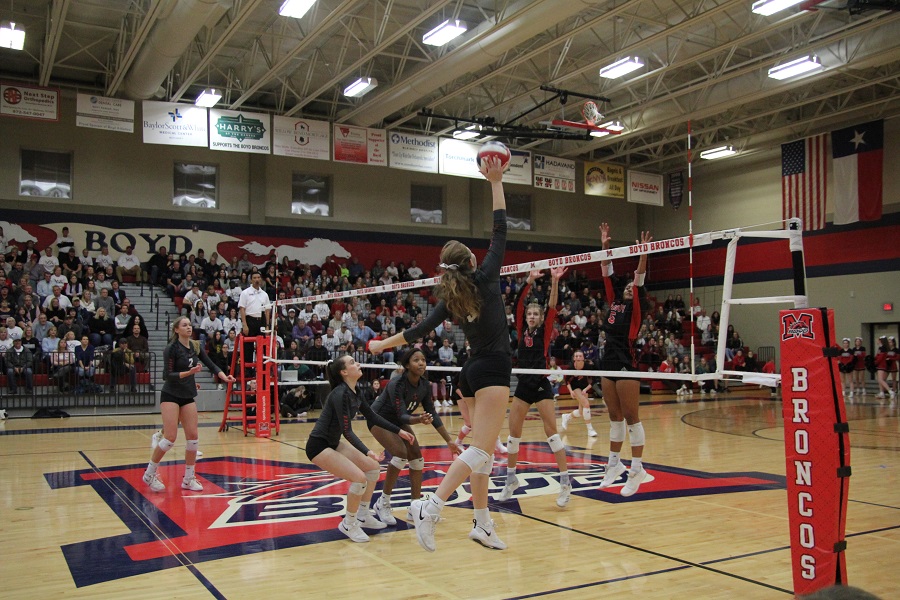 Rising up to hit the ball, junior Caitlyn Brown aims to avoid the attempted block from Lovejoy. Tuesday match was the third time in three years the two schools met in the Regional Quarterfinals with Lovejoy winning each time.

For the third time in three years, the Redhawk volleyball team took on rival Lovejoy High School Tuesday in the Regional Quarterfinals. Both teams entered the contest ranked in the Dallas Morning News top 10 5A teams and played in front of a packed gym at McKinney Boyd High School. But for the third time straight year, the Redhawks were grounded by the Leopards.

“Our student section, our fans were fantastic gosh how lucky are we to to be at such a great school that has that kind of fan support,” head volleyball coach Ui Womble said. “It wasn’t just our students which was fantastic, we had faculty and staff there last night we had, we had kids that played on the very first volleyball team here at Liberty 14 years ago in the stands last night, old alumni parents were there, our administrators were there, superintendent was there and some of his staff. It was really cool. Energy was awesome.”

Despite coming out slow in the first set falling 25-16, the Redhawks rebounded in the second set winning 25-22.

The back and forth continued with Lovejoy dominating the third set 25-15.

The fourth set, however, had fans on the edge of their seat as 25 wouldn’t be enough to determine the winner.

On and on it continued, until finally, the Redhawks secured the set 66 points (34-32) after it had begun, bringing the match to a fifth and final set.

“Overall, I thought we did our best,” senior Kyla Crawford said. “That’s probably one of the best games I’ve played. We had so much fight in us like that fourth set went to 34-32. We just never gave up, I was proud.”

After a three minute break, the final set was upon both teams, with each side knowing that 15 points was all they had to finish the game and extend their season.

The Redhawks jumped out to a quick 4-1 lead, but the Leopards wouldn’t be denied. Digging and killing their way back from the three point deficit, Lovejoy went on a 9-0 run and outlasted the Redhawks 15-12, giving the Leopards a 3-2 win, and ending Liberty’s season.

“I was really proud of how we played,” senior Emily Nickell said. “Even though it wasn’t the outcome that we want we played as a team and we were really unified and like a proud night to be a Liberty Redhawk player.”

For Lovejoy head volleyball coach Ryan Mitchell, a five time state championship coach, this was a game to remember.

“It was one of the most incredible games that I have had the chance to be a part of as a high school coach,” Mitchell said via email. “Both teams played well and left their hearts on the court.  I thought the execution from all players was very high and just an incredible atmosphere. Liberty brought a huge crowd and their student body was incredible all night long.”

With just 5 losses on the year, all to state ranked 6A teams, Mitchell praised the Redhawks.

“Liberty has been the best 5A team we have played this year,” Mitchell said via email. “They are incredibly talented on the front and back row.”

It’s what lead to the Redhawks going undefeated in District 9-5A. And while Womble isn’t happy with the result, the team played well in her eyes.

“We had such a great season and I loved the battle that we had that you know that we started off slowly, the first game which it happens when you’re good and in that in that atmosphere,” Womble said. “We made a lot of mistakes but then I thought we rebounded so well the second game and battled. All these things have to just turn out just right and to be down and then to win that fourth game was so cool. [I’m] sad that it didn’t turn out different. Lovejoy I thought they did a good job but I thought we also played really well.”