Just 10 days after Harper was born, she underwent the catheterization of her heart so that a stent could be placed inside. That was followed by her breathing tube being removed.

This began a roller coaster of recovery with many ups and downs.

On April 1, Harper went into cardiac arrest. Able to get her stable, doctors found yet another problem: her liver.

Throwing more into the mix, doctors were also concerned with her spine and brain.

I think what I’m thankful for, for this whole thing is Harper’s not going to remember any of this,”

Running a variety of tests, the results came back and Harper was cleared for both tethered cord and biliary atresia. But doctors predicted that Harper will learn at a slower pace and will likely need physical therapy, occupational therapy, and speech therapy in order to reach certain milestones.

The medical procedures came at what seemed a neverending pace. After moving out of the CVICU, she then received a G-tube.

Finally on June 1, Harper was allowed to go home for the first time.

The next day, June 2, Harper was admitted back into the hospital for an intestinal infection.

Then it was back home again, and then back to the hospital for pneumatosis in her intestines.

It was now time for her first open heart surgery.

Sept. 6 rolled around and Harper underwent the Glenn Procedure. After seven hours, the surgery was a success in rerouting her blood flow, widening the hole in her heart, and removing and clamping her PDA stent. 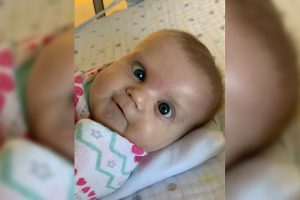 provided by Ben Manning
“I think that the outreach of support has been amazing,” Brittany said. “It’s been emotional to think that so many people and strangers just want to reach out and support us whether it’s financially or just a hug and somebody’s telling us that they’re with us and they are thinking about us and praying for us.”

“She’s strong little girl and she’s been through a lot,” Brittany said. “We’ve been through a couple surgeries, she’s had a lot of procedures done. That’s really hard on Ben and I, because we’re watching the whole thing. I think what I’m thankful for, for this whole thing is Harper’s not going to remember any of this.”

At this point, Harper began feeding and was weaned off sedation medication. Although she still has more hardships that lay ahead, the Mannings are thankful for the small victories.

“Harper I feel like has handled it like a champ,” Brittany said. “It’s been tough on us as parents to go drive down to Dallas and a lot of little things, you know, go up the elevator and find a room but, Harper has shown us that she’s an incredible individual and she’s really strong and she’s going to get through all this and that, that has really kept us going. I think more than anything.”

She and her parents will need to be strong as in three to four years, Harper will endure her second major surgery known as the Fontan Procedure in order to connect her Pulmonary Artery to her Inferior Vena Cava.