For just one of her major surgeries, it is estimated that it will cost the Mannings $30,000 in out of pocket expenses. To help offset the costs, a GoFundMe has been set up to benefit the family.

“I’m very humbling,” Brittany said. “I think that the outreach of support has been amazing. It’s been emotional to think that so many people and strangers just want to reach out and support us whether it’s financially or just a hug and somebody’s telling us that they’re with us and they are thinking about us and praying for us.” 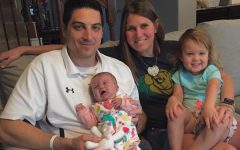 Financial support for the family has extended beyond the GoFundMe. In October, the volleyball team hosted a successful fundraiser at their game against Reedy High School.

“I can’t thank coach Womble and the rest of the volleyball staff enough,” Ben said. “It shows their heart, and they create such a family environment within the coaching staff, it was great. Not only did Liberty volleyball participate, I was surprised that was the Reedy team also was involved. They had shirts and they made a big sign for Harper and brought it to the game and it’s now hanging up in our room.”

From fundraisers, to donations, the Mannings are in awe of the support they have received.

“It’s the whole generosity from not only people that we know but complete strangers it’s been overwhelming,” Ben said. “It’s the amount of empathy people have shown to us and that they care and they care for us and care for Harper.”