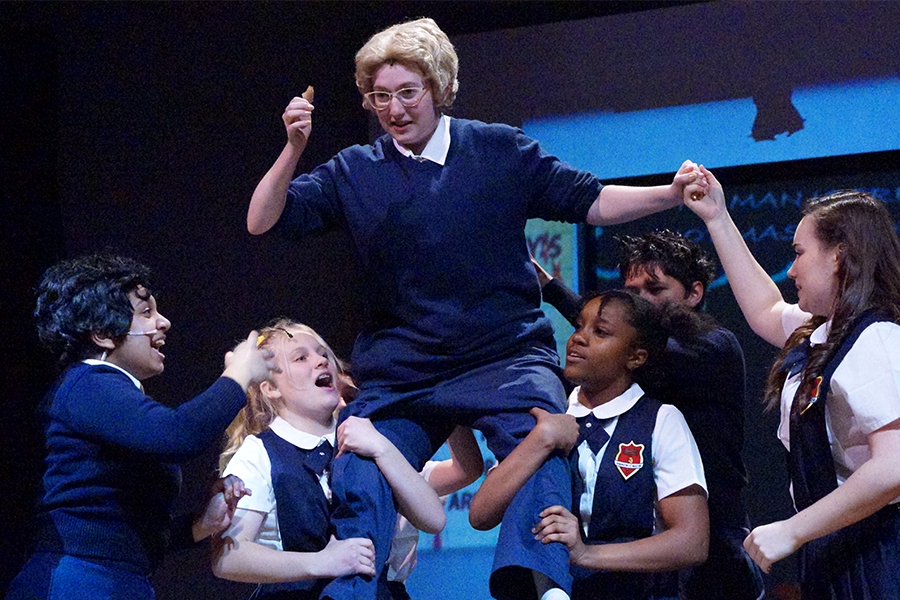 Lifted up by her fellow cast members, sophomore Mia Tremmel prepares to sing in the role of Bruce.

The theater department’s four day run performance of Matilda the Musical ended on Sunday with a standing ovation.

Adapted from the 1988 book Matilda by Roald Dahl, the musical tells the story of a little girl who’s neglected by her unloving parents but is able to find safety in books before finding a teacher who believed in her.

Playing Matilda, sophomore Jane Wester,  enjoyed getting to perform with her castmates and learning new things as an actor.

“As much fun as it is to perform, it’s more fun to perform with other people and getting their energy and to spend time throughout this rehearsal process with them,” Wester said. “It’s definitely a lot of work. I’m really tired, but it’s really really rewarding, to progress throughout the rehearsal process and just through the shows that we have to learn as an actor.”

While the focus was on Wester, other cast members enjoyed being part of the show.

“It was so great to be in the ensemble,” senior Shivani Desai said. “We got to be in so many numbers, and the dances and choreography were really fun. Being in the ensemble also meant we got to see more of the play from close up, which I really liked, because in the past I’ve had to attempt to watch from the sides of the stage.”

For audience member senior Hanna Turner, the character Miss Trunchbull shined in their own way.

“The principal is my favorite character. The actor who plays her did a really good job making the crowd laugh,” Turner said. “There were a couple of times throughout the play that I got confused, like when Bruce was eating the cake. I didn’t understand why but overall I really enjoyed this play.”

According to cast member, senior, Meron Tamiru, the cast was able to connect with each other and have many great experiences.

“We were able to build a theater family and we got stronger bones through the rehearsals we had,” Tamiru said. “And I think it really changed our lives in a way, we got to experience a lot of things. As a cast we got really close to each other, and we really got to see the future of the theater department through the the hardworking freshmen and sophomores.”