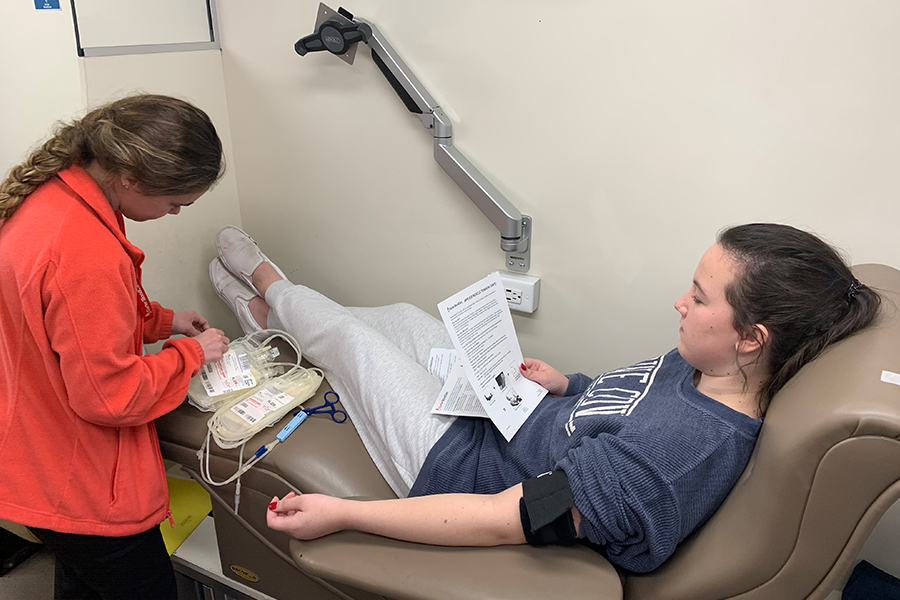 Buses line the school curb near the gym for the semi annual blood drive. Inside, sophomore Mary Hawkins reads an instruction page in the Carter Blood Care bus on Tuesday, Dec. 10, 2019 before donating her blood.

The annual blood drive hosted by HOSA is Tuesday from 9 a.m. – 3 p.m. and is open to those 16 and older with Carter Blood Care mobile donation vehicles located outside the auditorium and gym.

“This is the fourth year that the blood drive has been established,” HOSA president Anushka Sinha said. “We have donors that come in at whatever time they signed up for and they’ll go inside the buses that we have set up for them. After they donate blood, we let them rest and let them regain their energy a little bit before we send them back to their classes.”

For some students, the ease of donating on campus Tuesday makes it the ideal situation to give blood.

“Donating blood is something I’ve always wanted to do but usually couldn’t due to many factors,” junior Thrisha Malireddy said. “But, I don’t need to worry since they’re bringing it (the blood drive) right to our school. It’s a win-win situation for all.”

Missing class can be a concern for some students, but HOSA and Carter Blood Care try to make the process fast.

“There’s a good system going on,” senior Tristan Maravilla said. “Of course, each person gets around 30 minutes but that’s including the rest portion after donating blood. Otherwise, it only takes about 5-10 minutes to finish donating and then they move on to the next.”

In the effort to get as many people to donate as possible, HOSA expanded its awareness campaign.

“This year we’re expecting around 90 or so people,” Sinha said. “We’ve posted flyers, sent out reminds, and just spread the word vocally as well. We didn’t really publicize it a lot last year and I think that’s one of our mistakes that we did a good job on fixing this time. And a lot of the donors are walk-ins too so it’s hard to say exactly how many people will show up. But most of our donors are students mainly because it’s more available to them.”

Though a diverse selection of students are donating, many are united under a single motive.