Catching up after Matilda 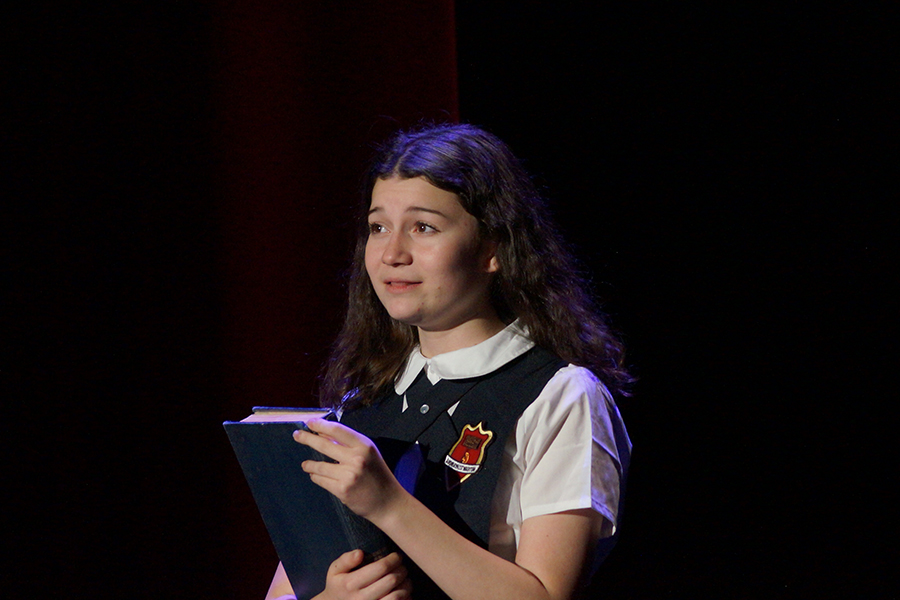 In the title role of Matilda, sophomore Jane Wester sings in the opening act. Students have been preparing for the musical since August, however, after the show completed, many students found themselves catching up on missed school work.

Between eight hour rehearsals and off-campus shows, the theatre department dedicated much of the first semester to the four day run of Matilda: The Musical Dec. 5-9, leaving some students playing catch up on school work.

“The week before the show we had rehearsals until 10 p.m. from Monday to Friday and we even stayed on Saturday,” sophomore Kailey Korth said. “So basically we were at school all week, making sure that we were cleaning up this one number or that we were preparing for the next show, and just stuff like that.”

Although Korth enjoyed preparing for the show, she admits that it was difficult to deal with rehearsals on top of all her school work.

“It definitely was quite a struggle balancing both school work and rehearsals because we also had to miss class for the elementary school performance,” Korth said. “I was a little unlucky and I actually ended up missing about four or five tests in total, but I think I can finally say that I’ve gotten them all out of the way now.”

Sophomore Hanl Brown, who served as the tech lead for the show, faced a similar predicament.

“Rehearsal was stressful from a tech standpoint because we were a bit understaffed for such a big production,” Brown said via text. “We had a few tech rehearsals on the weekend that were eight hours, and I tried not to think about stuff outside of the show for a while, but I have to make everything up now.”

While juggling everything on her schedule was a daunting task, Korth says she found a support system in the theatre department.

“It was for sure a lot of stress to balance everything but also on the theatre end of things, our directors were very understanding of the fact that the show was taking so much of our time,” Korth said. “We would have some time during rehearsal to catch up on some homework or even maybe a nap, just a little mental brain break from all of the pressure. They’ve been checking in on us, just making sure that we’ve got a good handle on things.”

Despite the stress and the busy schedules, sophomore Tarini Pankanti believes that the entire cast would do it all over again.

“I mean it was definitely a stressful experience, going between rehearsal and extracurriculars, but honestly I wouldn’t trade the moments we had in rehearsals for anything,” Pankanti said. “I think I can safely say that the entire cast had the time of our lives getting ready for the show, so while we’re all catching up to our school work now, it was definitely all worth it.”