A look into Spanish culture with a pretend quienceañera 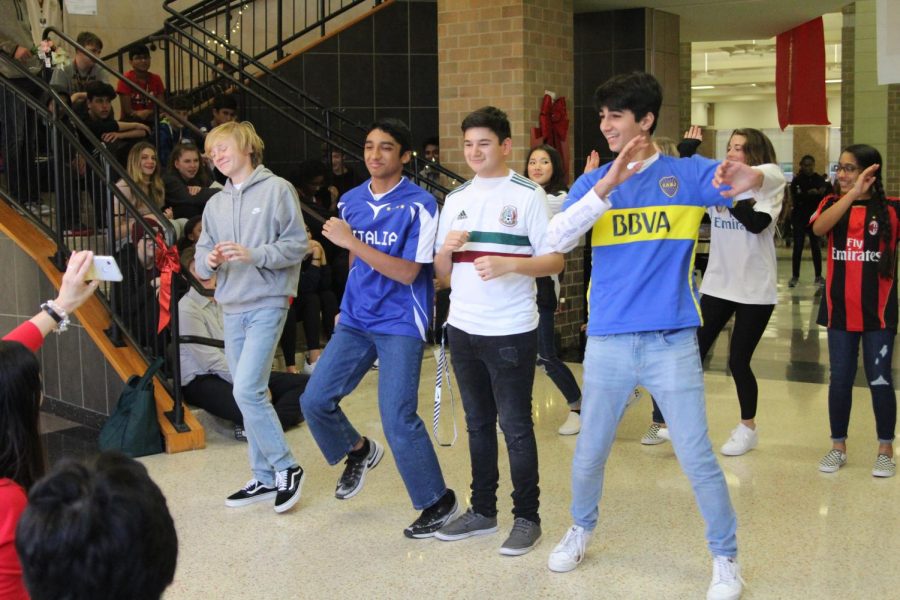 Freshmen Jake Harvey, Akash Pradeep, Evan Benavides, and Mikel Gevorgyan dance during a pretend quinceañera. Hoping to give students the experience of a quinceañera, Spanish 2 students take part in their very own celebration Wednesday.

Learning about quinceañeras, Spanish 2 students are acting and demonstrating what they look like Tuesday and Wednesday in the Lecture Hall with all students having a role and are able to learn through an interactive experience.

“Students are learning about the cultural practices, products, and perspectives of the Quinceañera 15th birthday celebrations, and writing a cultural comparison,” Spanish 2 teacher Patrica Flores said. “Students will recreate a Quinceañera Birthday Party reflecting the roles, and the Hispanic cultural aspects like the dance of the waltz, the toast, the speech, the court of honor, the godparents, etc.”

For freshman Jayna Yoon, the project is a great way to improve their learning of Spanish culture.

“I think that it’s really interesting to get to do a project in Spanish since we usually don’t do a lot of those,” Yoon said. “I think it’ll be fun to apply what we learned about in class and actually see it happen so I’m looking forward to it.”

Experiencing a real quienceañera, the project was a fairly accurate representation of the event for sophomore Anjali Pothakanuri.

“I think this project gives the students a good visualization of what a real quince looks like. I think with us having to learn a dance to present in front of other people brings in the real emotions that I experienced during the actual quinceañera just on a smaller scale,” Pothakanuri said. “This project and the quinceañera have the same concept however the real quince is a lot more stressful and organized. They are both based around the quinceañera however the court does a lot more than dance, and most partners were paired based on height and you most likely already knew the person. Also during the real quince, we had to sit through a ceremony in which the quinceañera was accepted to adulthood with the presence of God.”