Learning comes in various ways, with historical events often boiled down to nothing more than dates, facts, and statistics. But here on campus, from social studies, to English, to the fine arts, the Holocaust is getting an in-depth analysis. 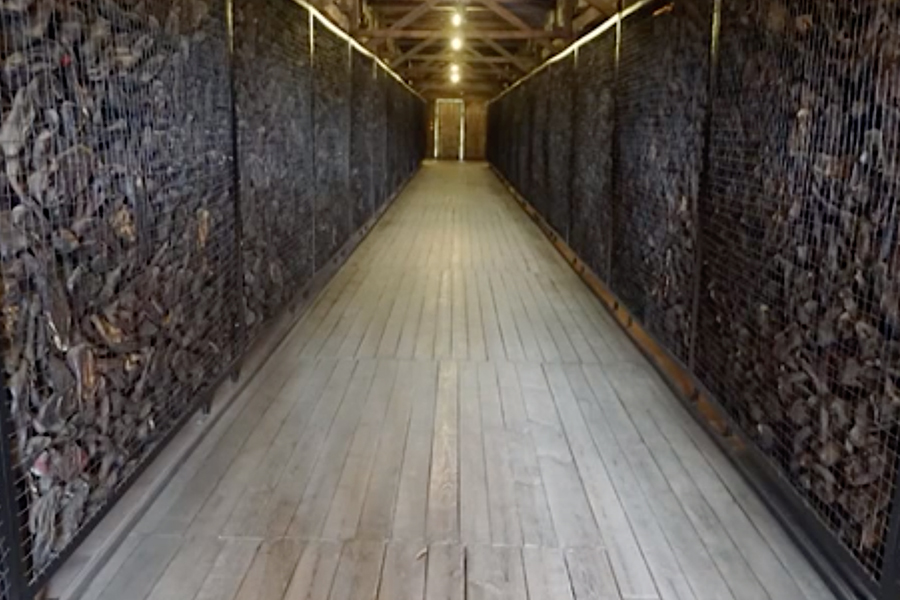 In 1933 the world took a dark turn, when the systematic persecution of millions of people occurred because of their ethnic, religious and political views.

High schools all over Texas will be remembering and recognizing the Holocaust.

History teacher Jeff Crowe has found that learning about the Holocaust is an important part of a student’s education.

“The reason that the state chose January 27th for Holocaust remembrance day, is that that’s the day that Auschwitz was liberated by the allied troops. We usually teach the Holocaust during the period where we are studying the lead up to World War II and then during WWII. But we also talk about the Holocaust when we look at other genocides around the country whether that’s in Darfur or the Armenians in Turkey, the Sudanese,” Crowe said. “They’re still going on in the world today, in Syria, in Myanmar there are people that are being targeted because of their ethnic or religious backgrounds.”

“This isn’t something that is new, this isn’t something that’s gone away, this isn’t something that’s started and ended with Hitler,” Crowe continued. “It’s something that every generation has to deal with and fight against, every generation has their own Nazis per se. I feel like and surveys have shown that there’s a little bit of out of sight, out of mind, people are beginning to forget about the Holocaust. So I support this law, I support remembrance day act. I think people need to be reminded and every new generation needs to be reminded that man’s inhumanity to man continues and it’s happened in the past and to guard against it. I think tolerance is an important part of public education, understanding diversity developing empathy for other people, I think that’s a big part of public education”

However, many students still find it difficult to understand the true nature of the events that happened.

Pre-AP English II students are learning to bridge this gap by reading the novel Night by Elie Weisel.

“Wiesel was a holocaust survivor and Night is his account of him surviving the Holocaust, being in Auschwitz and living through it when he was 15 years old,” Pre-AP English II teacher Chad Doty said. “I think the whole purpose of reading something like Night, in addition to just that general historical context, is to put kind of names and faces with those events and flesh out what it would’ve felt like to live through it. I think it is really important to read those first hand accounts, and experience the things or get close to an experience as the eyes of the person who experienced it. The biggest thing that we’ve talked about so far is the speed of the novel just how it’s written, it’s written at breakneck speed. It’s only like 90-80 pages or so, and he moves from one event to another. It really creates this sensation of momentum and I think creates a very powerful experience for the students.”

While students may have learned about the Holocaust in past classes, reading Night is helping them better understand what had happened.

“Before I read the book I knew that the Holocaust happened, and I knew that it was a great tragedy, but the book has really opened my eyes and it’s shown me the effects that it’s had on the families and all the Jews,” sophomore Hunter Ritchie said. “I think it sheds more light on the situation more than a statistic ever could. Part of when we write about it in order to be able to write about it we have to have to understand it and I think being required to write about it forces us to understand what they went through, understand all their problems and gives us just, understand the deeper meaning of what we are reading.”

The book gives students a more personal approach to learning about the Holocaust rather than through statistics.

“Reading the book it is just one guy telling the story but you really get to see a personal view,” sophomore Chloe Campbell said. “It is really nice to see exactly what they went through instead of hearing the statistics and hearing everything. I think learning about it definitely impacts us today because that’s like a lot of people that died and learning about it really helps us to prevent it in the future or just to see what they really went through and helps us to have empathy towards them and just to have love on them because that’s a really bad thing.”

Learning about the Holocaust on campus is extending to the theatre department.

Directing the student led production, The Diary of Anne Frank, senior Lauren Head was inspired by her visit to the Anne Frank House in the Netherlands.

“I actually got the chance to go to Amsterdam last summer, just for a visit to my grandparents and I hadn’t really learned a lot about Anne Frank at that point,” Head said. “I was reading her diary, actually on the way to Amsterdam. That was my first kind of experience with that. I knew the primary basis of the story but I didn’t know the details about it yet, and when I got there I had just finished reading her diary, and I got to experience how she lived in the annex she was in. It was really inspiring to me, because I got to see a girl with so much ambition and drive that I could relate to, but also was put through these horrible circumstances that I can’t even imagine in today’s society. That took a really big toll on me and how I observed the Holocaust, and how I observed the prejudice and bias that goes on in today’s world and the world historically.”

For sophomore Nathan Daly, being in the play also helped him understand the conditions people went through.

“I feel like it adds an aspect of realism to the whole thing so I do think I can relate to it more so than statistics,” Daly said. “I genuinely learned to feel for the people who went through the whole thing, and it saddens me to know all about it and it’s just kind of furthered my knowledge.”

For some students the holocaust is more than just something learned in a social studies class, it is an important part of family history, and is something that can never be forgotten.

“My family’s story was, so we’re Russian Jews, we lived in Russia or Ukraine, somewhere on the border,” freshman Alexandra Vasilkovsky said. “My great-grandfather was sent to fight. We had a Jewish last name at the time I believe this was on my mother’s side and my grandfather’s troop got captured by the Nazis, his best friend was shot down and to avoid getting sent to a concentration camp, because his name was obviously Jewish he took his dead best friend’s ID card and he switched theirs. He went to a Russian work camp, but he survived and went back home. Personally I don’t bode well with the whole Holocaust joke thing very well. The insensitivity to the topic really affects me. I can’t be tolerant of people who are making jokes about the Holocaust when it impacted millions of people and it cut down the Jewish population by like a third.”