A ‘diamond in the rough’ 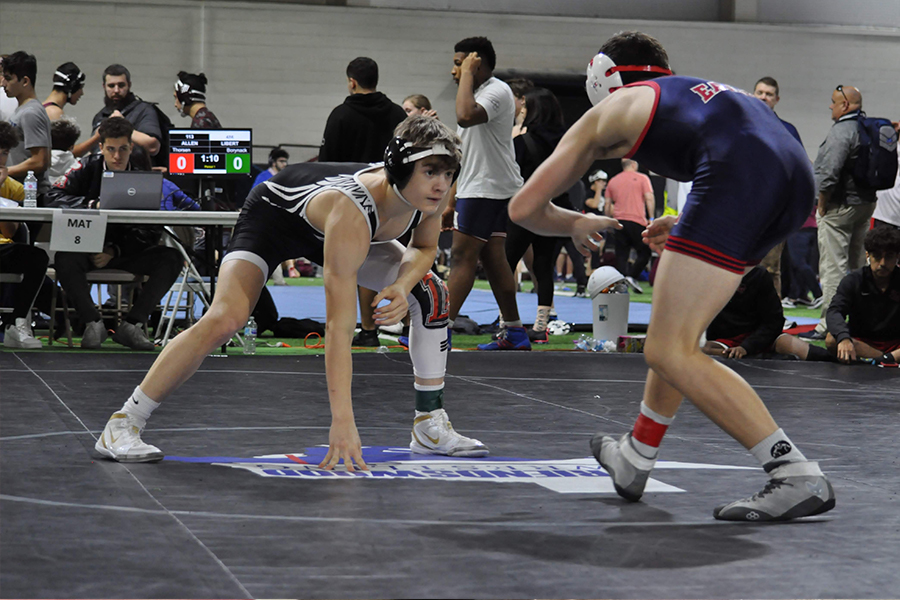 Squaring up with his opponent at Trinity Trojan Invitational, Freshman Mitchell Bornyack looks to shoot. The Trojan Invitational is one of Redhawk wrestling's biggest tournaments of the year, and with Bornyak placing fourth out of 64 competitors in his weight class, there are high expectations for what he can accomplish in just his first high school season.

With a winning record and almost 500 wrestling matches in the past four years, freshman Mitchell Borynack entered high school as one of the team’s most experienced athletes, bringing the Redhawk team an unexpected new edge in competition.

Even before Mitchel began wrestling, the sport was already part of the Borynack family dynamic.

“My brother wrestled in high school, and when I first started he was a junior and then in my second year he was a senior.” Mitchell said. “He wasn’t as motivated as me, but it was fun to wrestle at the same practices even though he’s a lot bigger than me.”

His brother, Nick Borynack, is proud to be part of the catalyst for Mitchell’s success

“It’s nice because I know I got him into it, and now he’s a big star, I’m proud of him,” Nick said. “It’s awesome, and I love it because he’s way better than I was.”

With both of his sons involved in wrestling, dad Zach Borynack, has been a central part of Mitchell’s wrestling career.

“With Mitchell, I’m pretty much the money man, pay for things, get him where he needs to go, a manager of sorts,” Zach said. “I used to coach him in the corner when he was in youth, we traveled together for the last couple of years, and we went to probably 26 cities last year, and more than 20 different states.”

When it became apparent that Mitchell had a future in wrestling, the sport became part of the family’s daily routine.

“At this point, it’s basically what we do other than school and work, and it’s kind of a hobby for the whole family, it keeps us busy,” Mitchell’s mother Staci Borynack said. “It’s awesome, he’s worked hard, and I think it’s hard for people to know the amount of hours and time he’s put into it, and to see it pay off especially as a freshman is awesome.”

But this level of success came at a cost, with long hours each day spent on the mat, preparing for competition to come.

“When I was a rookie, I would probably practice about two nights a week, and I was still practicing pretty decently hard for a rookie, but not nearly as much as now,” Mitchell said. “In novice, I probably switched to three days, but like now I do about 6 days a week, two practices a day.”

This level of commitment has helped Mitchell develop his skills over the years, and for Zach, there are still times where he sees his son take another leap forward in knowledge of the sport.

“There’s some key points in his four years that he’s been wrestling that he’s sort of taken a bunch of steps up,” Zach said. “It’s hard to see on a day to day basis, but when he goes off to  camp for a few weeks and he comes back then I start seeing him wrestle differently, he’s learned something.”

His effort and dedication is apparent to Mitchell’s coaches as well, such as Loft Style Wrestling Club coach Melvin lofton.

“Mitchell has gotten a ton better in every aspect of his wrestling,” Lofton said. “He has spent so much time developing his skills over the last few years with the way he trains and studies the sport. His work ethic separates him from most of the others in this sport and that is the reason why he has improved so much in such a short period of time.”

From the beginning, Lofton saw the potential Mitchell brought to the table.

“When I first met Mitchell five years ago, he was one of the nicest, hardest working kids I have ever coached,” lofton said. “He was very determined to be the best wrestler he could be from the first time he stepped into the practice room.”

When entering high school, head wrestling coach Cody Bridwelll was excited to have an athlete with the foundations of training already built.

“I guess when he was coming on the team and I heard that he had experienced my my first initial thought was great, I don’t have to teach them the basics,” Bridwell said. “Having him come in as a more accomplished wrestler and understanding much more has made it easier at least in some ways to coach him.”

With Mitchell’s full time dedication, coaching him is a unique opportunity for Bridwell.

“He is one of those diamonds in the rough because you don’t get a lot of kids that come in that are solely dedicated to wrestling,” Bridwell said. “Any wrestler that’s willing to grind out his season has earned my respect. But any wrestler that’s willing to go above and beyond that, like Mitchell does, where he goes to summer camps, travels around as much as you can, and I think that that shows an extreme level of dedication.”

His training has not only improved his mindset on the mat, but in the real world as well.

“Wrestling teaches you how to take criticism, and to be criticized on every single match you’ve wrestled,” Borynack said. “Wrestling for a long time will teach you to be mentally tough in life, and sometimes you have to push through things, and you learn a lot of life lessons.

Along with his coach’s constructive criticism, Zach believes that Mitchell’s losses have helped him grow the most.

“In the beginning he won a lot because he was good, and nobody had any experience and he just ended up winning a bunch, but once he started getting good and started losing when going from novice to open he had a really difficult time dealing with that, so that was sort of on the down side,” Zach said. “And since his skills have really started going up notches, he is a lot more confident, he carries himself more maturely. He still has his little slip ups every now and then, but I think he’ll just continue to get better every season and take on more responsibility.”

For Mitchell and his father, wrestling has helped them work through frustration and defeat together, making their relationship even stronger.

“It’s rough sometimes, but I think we work through difficult things together you come out stronger in the end,” Mitchell said. “There’s been a lot of tears and sweat, but in the end, we come out on top. We’ve traveled a whole bunch together last year, and got to bond a little bit dealing with losses and stuff, and it has better expanded our relationship.”

As Mitchell transitions into high school wrestling, dad is preparing to play less of a coaching role for Mitchell.

“I’m ready to sit in their chair and watch and video and travel a bit,” Zach said. “I think I’m a little nervous having to sit back and not have any control, but at the same time, when I’m sitting in the corner I’m just as nervous.”

As for the future, Mitchell has his sights set high.

For Lofton, these goals are just in reach for Mitchell as the UIL District 8 tournament approaches.

“I definitely see a couple of state titles and maybe a couple national titles in high school for Mitchell before it’s all said and done,” Lofton said. “Mitchell definitely wants to wrestle in college one day and I truly believe if he keeps working really hard, like he’s always done, that could really be a reality in the near future.”

“I want him to get what he wants to get out of it,” Zach said. “If he wants to go to college and wrestle that’s great, I know he talks about it all the time he wants that, and I hope he can get there.”

Staci just hopes that he can be a positive role model for other athletes as he gets older.

“I hope that he can just be a leader and a role model and teach others that its being the hardest worker in the room is what matters,” Staci said. “As long as you’re willing to work hard and have the self discipline anybody can succeed.”

As he continues to work and improve, Mitchell encourages newer wrestlers to keep working, and success will follow.

“Just be consistent with how much you practice, and don’t be upset with our losses just losses,” Mitchell said. “Just learn from them and don’t put everything out from those losses and don’t quit too early, you might lose to begin with, but you have to keep going.”