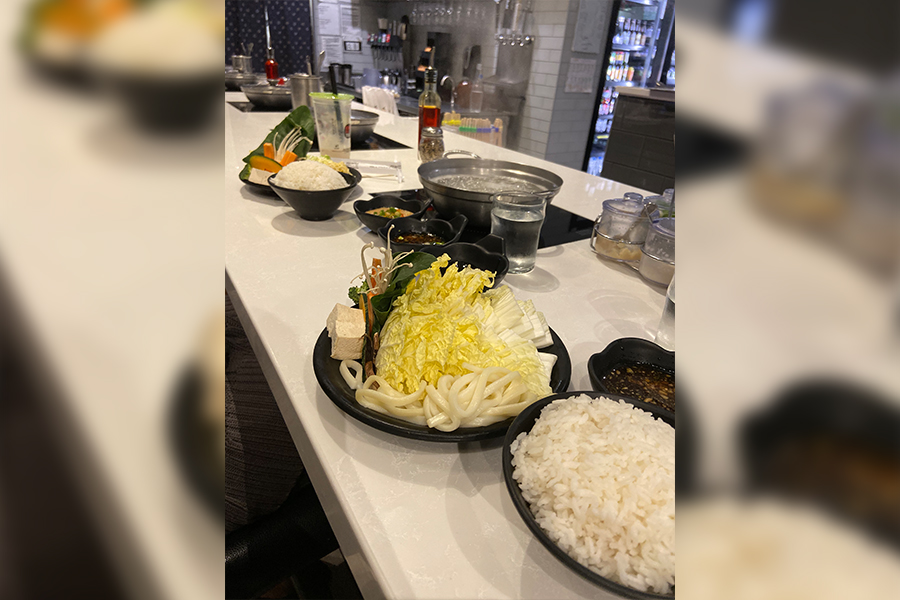 Yoshi Shabu Shabu is a traditional Japanese shabu-shabu restaurant that has authenticity and quality, in each and every dish with the only downfall: the price.

When first walking in, diners are greeted by the modern vibe of the restaurant. It has a clean and contemporary style.

Shabu-shabu is a dish that consists of a pot with choice of broth, a side dish of raw meat and vegetables to cook by dipping into the boiling broth, often accompanied by some sort of sauce and rice.

The menu has a variety of options and offers many combinations for shabu-shabu with customers getting to choose the base, meat, and noodles. With six base options, thirteen meat options, three noodle options, there are more than 200 combinations to choose from. The menu also includes many gluten-free and vegetarian alternatives.

With every shabu-shabu, it comes with free assorted vegetables, rice, sauce set, and soup. The Traditional Kombu Dashi was a refreshing base that was very light and crisp with seaweed infused into the soap. It tasted exceptional paired with the Choice Ribeye and Scottish Salmon. Also, you could tell the meat and seafood was fresh and natural.

The sauce set includes three sauces: Goma Sesame Peanut, Citrus Ponzo, Roasted Garlic Teriyaki. This gives you a lot a personal preference and liking. All 3 of these sauces go perfectly with the broth, rice, and vegetables. The flavors blend perfectly together with each sauce having distinctive tastes.

The total price for two people was $50 which is a bit pricey with similar restaurants often offering a lot more for $50.