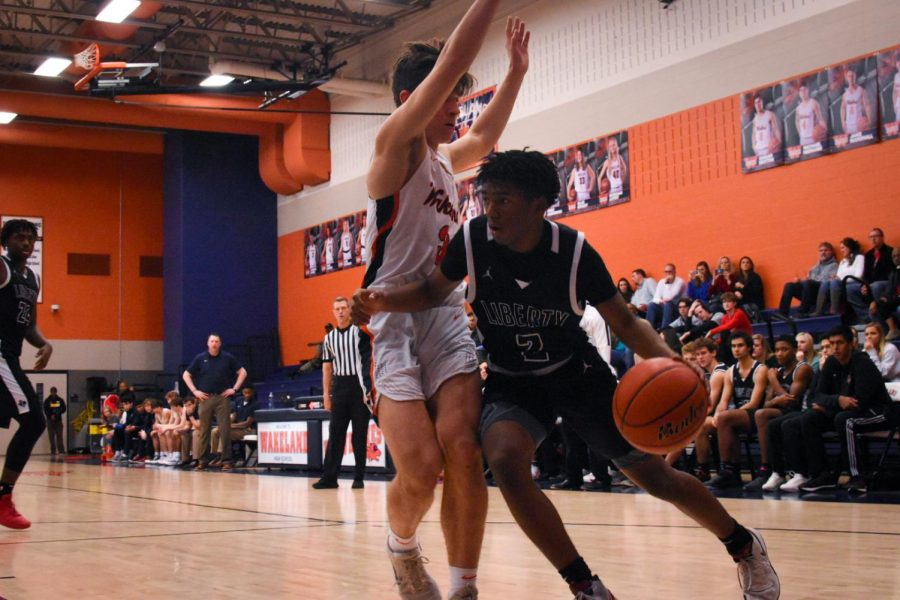 Trying to break through the Wolverine defense, junior Trey Walters dribbles the ball at Tuesday's game against Wakeland. The boys play their final home game at 7:15 p.m. at the Nest.

Six seniors will put on their Redhawks uniform for their final home game as they take on Lebanon Trail for their last home game of the season Friday at 7:15 p.m.

“Senior Night is always an emotional time, especially with this group of seniors,” head coach Stephen Friar said. “They’ve all been together and playing with each other for a long time. They’ve been a great class, respectful, done things in the classroom, done things on the court, done things for their community really well. So it’s a group I’m really going to miss but it’s also one of those times where the guys coming behind them need to see the bar they’ve set and try to exceed that next year.”

For senior Micaiah Abii, Friday’s final home is a time to reflect on his four years as a Redhawk.

“Liberty has had a positive impact on both my athletic career and as a student,” Abii said. “As an athlete I got to experience a humble and a leadership role and as a student we were kept to a standard that reflected on our grades and how important they were. As far as playoffs all we can do is try to win the rest of our games