Casting ballots: the politics of voting

A Wingspan special report on voting, youth participation, bipartisanship, compromise, and the implications of gerrymandering 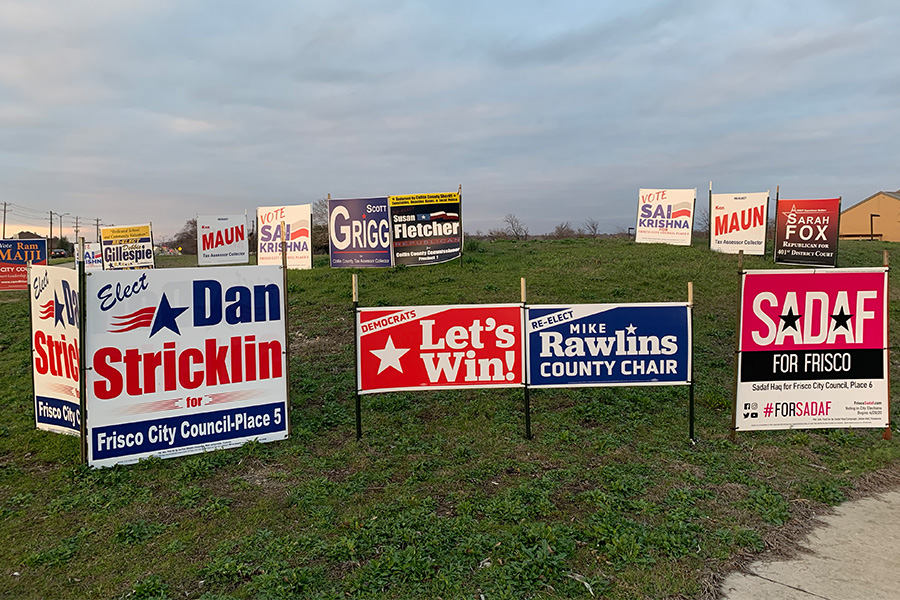 At the corner of Rolater Road and Independence Parkway, dozens of campaign signs are set up to advertise candidates for local elections in Frisco and Collin County. “Sadly in city elections, we’re lucky to have 10 percent of our registered voters actually show up to vote, so very few actually do, and local elections like the city actually impacts people’s day to day lives even more than national and state elections,” Frisco mayor Jeff Cheney said.

Texas is amongst the states that holds low voter registration and turnout, ranking 47th compared to all the other states in terms of voter turnout for the 2016 presidential election.

Although 15.8 million Texans registered to vote in Nov. 2018, less than half of the eligible voters participated in the mid-term election.

But that could be changing as voter registration surged to a historic record of 16 million voters ahead of the 2020 presidential primaries, with early voting in Texas beginning Tuesday and running until Feb. 28 and the state’s official election day taking place March 3.

“Ideally, all citizens would be registered to vote and would vote on election day and perhaps participate more broadly and some might even run for office at some point in their lives,” Jillson said. “But we don’t live in an ideal world, so I would be satisfied if most people followed politics, registered, and voted.”

Partisanship and political animosity reached a new peak in the United States in 2016 and has yet to die down in 2020. However, a majority of Americans agree it’s important the country undergo efforts to bring people together in a time of divisiveness.

Several teenagers have been leaders in this effort for unity, from Emma Gonzalez and Greta Thunberg, to Yara Shahidi, Marley Dias, and Autumn Peltier, all of whom are trailblazing movements to transform politics through climate change awareness, gun control, and intersectional equality.

This participation in advocacy is transferring to the polls, as since the 2016 election, recent elections have seen a greater turnout among voters 18-24 years old.

Frisco mayor Jeff Cheney believes young people making their voices known works as preparation and practice for when they turn 18 and can apply their views to the polls.

“When you turn 18, you’re given that right for your voice to be heard in these types of matters, so you can’t start soon enough,” Cheney said. “The more young people that get involved at 18, those people will continue to be involved going forward through the rest of their lives. So it’s important for our youth to certainly have their voice heard as well because that will dictate outcomes in elections.”

Despite this increase, demographics still show overall voter turnout at its lowest between ages 18-29.

“Some students choose not to vote because it’s probably not understanding, not being informed, or not being educated on the issues,” Cheney said. “We see that with all ages really, where people don’t even know an election is going on, or they don’t know who to vote for, or why they should vote for somebody, or have never met the candidate, or don’t understand the issue. It’s the candidates, and the cities, and the entities’ job certainly to try to inform as many voters say they can and make it easy for people to get the information so they can decide on their own and cast a decision, but I think we probably see that more in the youth because they don’t know how to get started.”

Low involvement is seen at the local level as well, as according to Cheney, only a small portion of registered voters actually cast ballots for issues directly affecting Frisco.

“Sadly in city elections, we’re lucky to have 10 percent of our registered voters actually show up to vote, so very few actually do, and local elections like the city actually impacts people’s day to day lives even more than national and state elections,” Cheney said. “But unfortunately a lot of people get busy with their lives and don’t focus on those things and show up to vote, and their voice isn’t heard, but I think it’s important that everyone knows what’s going on in their community and participates in some way, whether that’s serving for office or volunteering, or at the very least, just casting your vote.”

In a study conducted by Yale University it was shown voting once can increase the chances of voting again.

“Young people are less integrated into their communities, even if they have lived in one community their whole lives, than are their parents and grandparents,” Jillson said. “People follow politics more closely when they get married, have kids, buy houses, and have more experience with taxes, quality of schools, and the like. But political participation is a habit, so it is good to get started paying attention and even participating early.”

The call for compromise

A few cities allow teenagers as young as 16 to vote in local elections and while many states allow residents 16-17 to register, 18-years-old most often marks the age in which someone has the right to vote. But according to Plano YMCA and Liberty Youth and Government president Sam Mills, teenagers can still make their views known.

“Young people should not feel disadvantaged by the system, because we do have a voice, we do have our opinions and I think it’s really important that we go and show that,” Mills said. “That applies to the fact that I might not agree with everybody in our age group, I guess that’s true for anybody, but I think that it is important that everybody makes their voice heard because that’s what this country is built on and that’s what it’s all about.”

For Mills, the inability of elected officials to work with members of the other political party is the problem that plagues politics in America.

“I think bipartisanship is the most important issue affecting us in America today: the fact that our representatives in Congress cannot work together solely based on their partisan affiliations,” Mills said. “It used to be better to where they could reach across the aisle, but now it’s just grid-locked. We just have to stop treating each other like we’re doing the wrong thing or trying to work against what’s best for everybody, and just focus on being passionate, obviously expressing our opinions, but at the same time we have to make compromises somewhere because that’s how we make progress as a society.”

Jillson relates compromises in government more so to getting along with others rather than fully agreeing with one another.

“In politics and most other areas of life, compromise, or at least recognizing the perspective of other people, is necessary to getting along. Try marriage without compromising some of your views,” Jillson said. “Only a fool never changes his or her mind or refuses to change old views when new information comes to hand.”

For Frisco’s mayor, it’s something that’s done on a regular basis.

“One of my prime jobs as mayor is to build a consensus, so we have six council members, and on any item, I run the meeting and try and get us to a vote and sometimes not all council members agree,” Cheney said. “I do try to overcome objection, so if I knew the vote was going to be four to two, rather than just calling for a vote, [I would] see if we could find some further compromise so the two people who may be against could then become for it, and I think that’s how you get better outcomes. Debate is good and different viewpoints are good, and certainly working together to find common ground will generally lead to better decision making.”

On campus, Young Democrats Society president, senior Annie Hawkins is working to provide a place where all are welcome, leaning left or not.

“I believe that YDS is important because it provides students the opportunity to learn about what being a Democrat is all about and how they can get politically involved at a young age,” Hawkins said. “My goal this year is to make YDS a more inclusive, not promoting the idea that only Democrats are allowed to get involved in the club.”

Entering high school, Hawkins was less open to views skewing right, but the need for bipartisanship has changed her beliefs.

“Coming to a compromise is now definitely my priority,” Hawkins said. “I was very closed off from hearing what right leaning politics had to say when entering high school, but I have learned a lot and some of my opinions have changed due to just listening to what others have to say.”

Young Americans for Freedom president, freshman Jack Dehnisch agrees with Hawkins and believes there is a need to find middle ground amongst different viewpoints.

“I chose this club to promote patriotism along with conservative views on campus,” Dehnisch said. “I feel that students should be exposed to both sides rather than one or the other. I think it’s important to find a compromise because no single human thinks the same as one another, and it’s vital to find a happy medium.”

But an obstacle of bipartisanism and compromise is the history of racial gerrymandering and suppression of voters in America.

Hoping to empower future voters, a club just north of the campus at Independence High School provides a space for Black students to express their views and opinions as part of the Black Student Union led by seniors Blayke Gilmore and Bryson Ferguson.

“We wanted a safe but also open community for those like-minded to come together and create healthy discussion and interact,” Gilmore said. “Over the years, especially the past few, the racial and political climates have been strained and stiff. We as a society, on a daily basis, hear about the different cases of racial tension, whether it be a shooting, unlawful traffic stop, or even blunt hate crimes. The BSU creates a place where we can talk and discuss what we hear, not an exclusive discussion but an all inclusive one.”

With recent advancements to the Voting Rights Act of 1965, which constitutes the prohibition of discriminatory practices that prevent minorities, the elderly, and young people from voting, steps have been made to counteract the effects of gerrymandering.

But action against gerrymandering can only go so far, as in 2018, the Supreme Court ruled in Rucho v. Common Cause that it could not set a constitutional standard of what partisan gerrymandering was, leaving it up to the state to decide.

With many state governments controlled by one party, this means districts can and have been drawn in favor of party affiliation, rather than representing the demographics of a region.

For example, Black, Hispanic, and Asian people tend to overwhelmingly vote Democrat, but if they were to live in a district designed to favor Republicans, their vote may not matter.

Nevertheless, Ferguson believes voting allows people to, at the very least, speak up and speak out against injustices like racial gerrymandering in order to work against institutional racism.

“The more involvement, the more accurate representation of the entire population is shown,” he said. “I am a firm believer that everybody should at least vote. If everyone votes, then the solution is more likely to be accurate and relevant to the majority.”

From Thunberg to Dias, Gilmore sees youth participation in national and worldwide issues as pertinent in order to ensure a better tomorrow.

“It is important for today’s youth and those in the future to have a strong voice,” she said. “Many students coming out of high school are concerned with issues such as climate change, and their voices are consistently ignored. Today’s youth will be affected by the decisions made within the century. By failing to stand up, protest, vote, etc., we risk damaging our future and our home. If we don’t speak up now, we’ll have to fight wars we had no decision in and pay the debts of previous financial choices.”