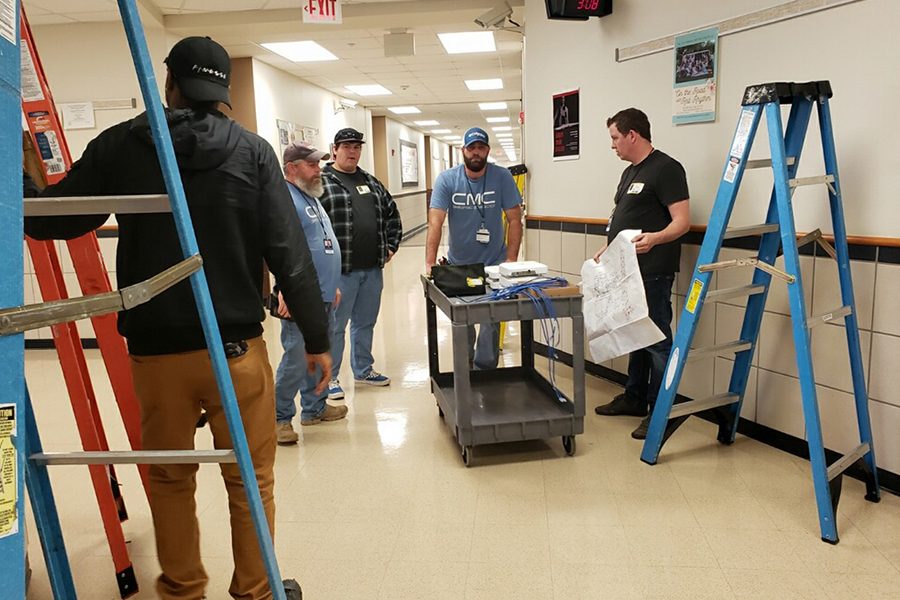 Attempting to eliminate holes in reception, 100 new wireless access points have been added to the campus to help improve wifi connection. In what used to be one of the worst hallways for reception, the C hallway is already seeing the benefits of the access points.

Numerous classrooms on campus have a new addition as the technology department installed additional wireless access points in every room to improve WiFi coverage on campus.

With the one to one initiative in place next year, digital learning coach Clayton Pope believes the WiFi must be up and running sooner rather than later.

“Next year there will be one to one with freshmen,” Pope said. “All freshmen will have a device on campus, probably 500 extra devices. That means years after that and three years after that, with the seniors it will be an extra 2000 devices. With that, you have to have the infrastructure in place on the network to handle that much network capacity. They are replacing the access points in each room so they can handle all the increased demand, in terms of kids going to websites, kids potentially doing videos on Canvas, things like that. It will be a lot of required data for the network to handle, so the improved access points will help manage that so we don’t have a crash in the whole school.”

Although senior Alex Rocha hasn’t had many issues with the school’s WiFi, some issues have come up.

“I think it’s been pretty consistent since my freshman year honestly,” Rocha said. “Some classrooms on the inside like the tornado rooms there’s practically no connection.”

FCCLA teacher Jessica Fisher is located in a cinder block classroom which often leads to trouble connecting to the WiFi.

“We have had many days where my lessons were interrupted by WiFi connection,” Fisher said. “Sometimes the problem was outdated Chromebooks, but it was often WiFi. Connectivity has been better this year than last year though. More consistency can only help at this point, especially as we add more Chromebooks to the network next year.”

Some issues with the WiFi can be linked to the use of hotspots by students.

“We can’t control what you do on your phone other than hotspot,” Frisco ISD Technology Support Specialist Brittony Guillen said. “Our system is programmed to kill hotspots as they can cause issues for the waps, our systems if they see hotspots or any robe signals will try and cut it off, that way the wap stays up and running. But if a lot of kids in a classroom turn on their hotspot, then wifi is not going to work, it’s going to diminish the signal for students. If people are turning on their hotspot or doing something, you could have no wifi.”

Guillen believes students are set to go once they are connected, however there is more work on the district’s end.

“Once they are all installed and up and running, yes technically they are as long as you can connect to it, they’re good, but on our end they have to program it,” Guillen said. “It’s kind of like a WAP you get at the store but because were a district we want to go in and make sure everyone is protected like nobody can get into the wap and try to get in that a student may be working on and steal information, we have to add extra measures to our units to make sure that they are up and running for district use versus home use.”