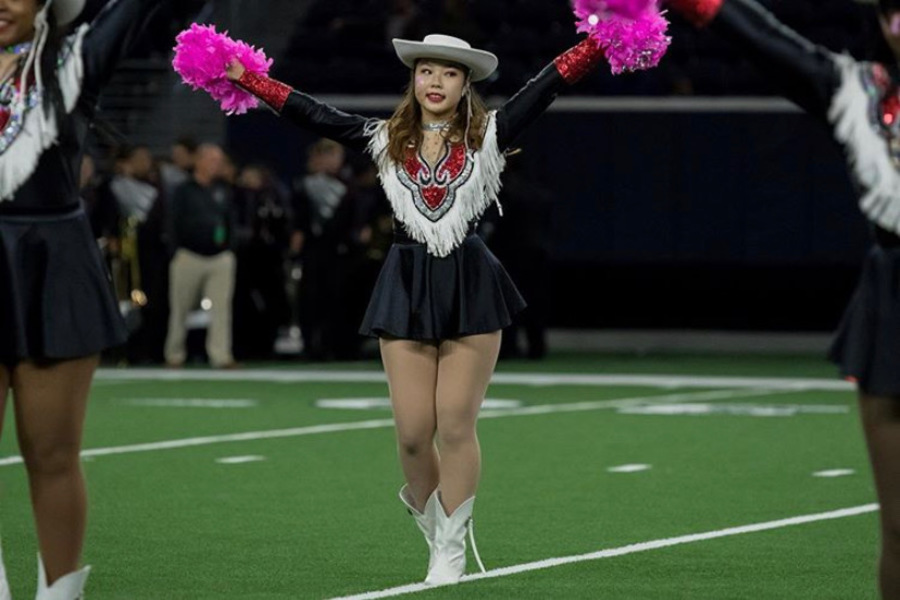 Wingspan: Why did you want to audition for Red Rhythm?

Kim: “Honestly, I didn’t really know what it was at first. All I really knew about it was that it was a dance team at school who perform at football games and at pep rallies. But I auditioned because I really wanted the experience of doing something I usually would have never thought about doing.”

Wingspan: As someone who has never danced before, what was your first impression when auditioning for Red Rhythm?

Kim: “‘I’m not going to make it. It’s just for the experience’ is what I had thought. I went to the audition for the sake of having an experience I was very intimidated at first because everybody else was so flexible and had so much experience from either being in Red Rhythm before or from having prior dance experience. I felt so out of place.”

Wingspan: How does the drill team differ from your other interests?

Kim: “Dance was always a top interest I had, but I was not really able to express it because my parents had opposed me doing anything related to fine arts. All of my ‘interests’ growing up had to be something academic. But the thing I really like about doing drill team is the fact that now I can do dance and express that interest.”

Wingspan: What have your parents said about your drill team journey?

Kim: They opposed me even trying out at first, and we agreed on me even trying out if I promised to quit if I make it; again, I only really auditioned for the experience. I get no financial support either, so I am probably the only girl on the team paying for 100% of costs going into the drill team myself. But, they do enjoy watching me perform, and they are glad I am doing what I really enjoy doing.”

Wingspan: In what way has this extracurricular impacted your social and academic life?

Kim: “I definitely made so many more bonds and got to know so many new people. I talk to and am even friends with people who I never would’ve thought I would even have a conversation with. It’s a really good way of bringing so many different people together. I made my closest friends here. Academically, it does impact it in many ways because it is such a big commitment, but as long as I stay on top of everything, it really isn’t too bad.”

Wingspan: What has been the biggest struggle when trying to balance school and dance?

Kim: “I am currently in 7 APs as well as drill team and I even have a job; meeting deadlines have definitely been a big struggle for me. But, I try to do my work and study whenever I can and make sure I stay on top of my grades while having so many time commitments.”

Wingspan: Seeing as you have been pretty successful as a member of Red Rhythm (such as by winning “Rookie of the Week) despite this being your first year dancing, is this something you would like to continue doing throughout high school and into college?

Kim: “Although I love it so much, I have no intention of continuing to dance professionally or even as a choice of further education after high school. As I said before, my parents do not approve of me going into the arts field. Instead, I will pursue orthodontics.”

Wingspan: How does the drill team impact you?

Kim: “It definitely builds up your character. You get stronger mentally because you are always constantly pushing yourself to do more than what you believe you can do. There is honestly no time to get caught up in the negative aspects, just time to improve. I and a lot of us sort of have that ‘positive vibes only’ mindset.”

Wingspan: How would you say the drill team had “changed” you?

Kim: “It changed me very much. I improved as a dancer and as a person as well. I learned to respect others and to be in a community. I have never been on a team before, so Red Rhythm had also taught me what it means to be a part of a team; supporting each other and building off of each other and growing together. I gained a lot of confidence and found what makes me really happy. But on another note, my sleep schedule changed all thanks to morning practices. Even though I don’t like waking up so early for those, again, it helps me to build character and discipline.”