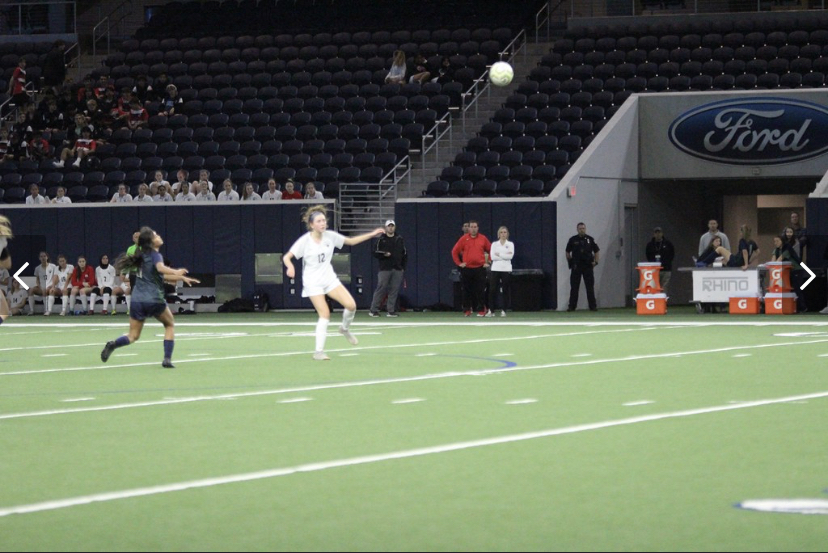 On Thursday in the middle of soccer practice senior Kallin Brown went to the bathroom and got stuck. After an hour and a half and a call to the Frisco Fire Department, she was able to get out safely.

What most people consider a quick break turned into a little over an hour long ordeal when soccer player and senior Kallin Brown realized she was locked in a bathroom Thursday morning with no one around.

“I asked to use the restroom and [head coach Kyle] Beggs gave me the key to use the bathroom by the tennis courts,” Kallin said. “I unlocked the door with the key but couldn’t get the key out of the door so I decided I would just keep the key in the door, However, as I closed the door, the door locked behind me and the dead bolt broke to where I couldn’t twist it to unlock.”

Anxiety began to settle in once Kallin realized she was stuck.

“I started to freak out a little because I didn’t have my phone to call anyone,” Kallin said. “But knew that someone would come check on me eventually.”

“I found her as I was walking out to the soccer field from the turf room,” senior and soccer player Anna Clerkin said. “There was a key in the bathroom door and I could see and hear the lock moving so I stopped. I tried to help for probably about 5-10 min before I saw it wasn’t working and I went to get [head coach Savannah] Bryant.”

“The soccer team noticed that she had been gone for longer than a restroom break usually takes,” Beggs said. “I then went to check on her and about halfway down Coach Bryant called me to let me know she had found her stuck in the bathroom.”

With Kallin found, news spread to the rest of the team about the incident.

For soccer player and younger sister, Reese Brown, her reaction was different from Kallin’s when she heard.

With a now growing number of people watching, Beggs realized the problem went beyond the stuck key.

“I thought the door was just jammed and we needed to get it unstuck,” Beggs said. “Upon realizing it was broken we immediately notified the school administration of the problem. The locksmith from the district tried to fix the lock, and even remove the door from its hinges, however he was not able to get the door open.”

Along with many phone calls to the district, Beggs tried to contact Kallin’s parents.

“I was in a board meeting when Coach Beggs called and didn’t initially answer,” father Rick Brown said. “My first thought was either Kallin or Reese had been injured at practice, so I was a little worried.”

“I was surprised by how calm I was but I was trying to think of jokes and make the situation as lighthearted and comedic as possible,” Kallin said “To keep busy, I walked in circles and tried to think of how other people were reacting to me being stuck in the bathroom.”

“When they arrived they were able to use an axe and a special tool to break the lock in the door which allowed it to open,” Beggs said.

Getting stuck in bathrooms is something that seems to run in the family.

“You’re out and safe so I guess the school did a good job,” Rick said. “But I broke out from being locked in a bathroom at our house in a fraction of the time, so I was just wondering what took them so long.”

Though stressful in the moment, Kallin now finds comedic value in her situation.

“In the end everything worked out,” Kallin said. “I didn’t get hurt during the process and now it is a funny story I can tell.”