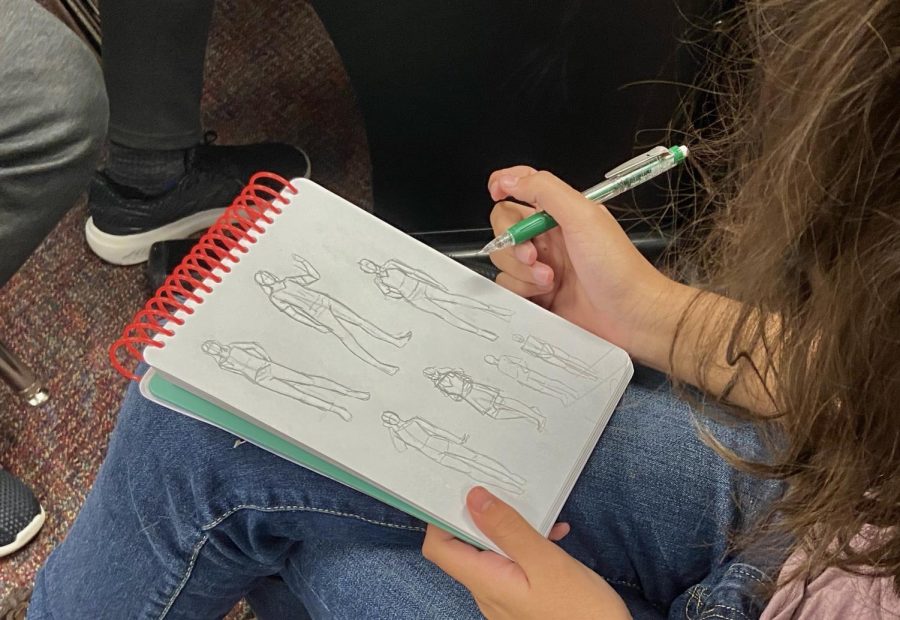 It all started in class when Laviolette realized she really had a knack for drawing.

Future College:  I am looking at going to UTD

Future Job: I want to be an animator

Wingspan: How did you start doing comics for Wingspan?

Laviolette: “I was in broadcast my freshman year and on an assignment, I had doodled just like a doodle, little cartoon character, and he [Wingspan adviser Brian Higgins] saw it and he thought that it was really good and that he wanted me to do the comic because they’ve never done a comic for Wingspan before.”

Wingspan: What got you started into art and drawing overall?

Laviolette: “I’ve always wanted to be a writer. That’s what I imagined myself doing was writing. But writing is hard. Yeah, so I decided that I would draw my stories instead. And I’ve been drawing ever since.”

Wingspan: Did you start off with non-digital art?

Wingspan: When do you transition into like that digital art?

Laviolette: “Yeah, I think for my birthday, the summer before freshman year, I got a tablet with a stylus.”

Wingspan: What other artistic thing do you do?

Laviolette: “I am in musical theater. I have been in it for two years. I actually started it because acting is like an important part of animation. So it’s gonna help me animate characters better.”

Wingspan: What’s your favorite part of musical theater? The singing or the acting?

Laviolette: “So I’m better at this singing. But I do enjoy acting. We do acting exercises, it’s just the beginning of the year, so we haven’t done much besides like check off exercises,

Wingspan: When did you start singing?

Laviolette: “I’m from a family of singers. So I’ve been singing ever since I was younger but I like started doing voice lessons in seventh grade.”

Wingspan: What type of things would you like want to animate in the future?

Laviolette: “I want to become a showrunner. So I want to make my own children’s TV shows. I like storytelling.”

Laviolette: “Avatar is always been good, like, I rewatched it recently. And oh my god, it’s so good. It holds up. It really does.”

Wingspan: Anything you want to add?

Laviolette: “I also hope to be able to make like graphic novels and children’s books and stuff in the future. Just like, I like writing and drawing, and I think it’s a very good combination of the two and it’s something you can do more independently than making your own TV show.”

Wingspan: What would you say to other people who want to  go into animating or musical theater?

Laviolette: “Just don’t stop. A lot of people start drawing or start singing or start acting and then like, eventually like chicken out because like, they’re not good enough or it’s not fun, but it’ll get more fun as you get good. And it will you’ll get better as you continue to do it and you got

Wingspan: What do you tell people to stay motivated?

Laviolette: “You just got to draw whenever you can. For like years, I’ve just carried around a sketchbook with me literally everywhere I go, and at any moment I get, I just doodle. At least, just draw every day.”