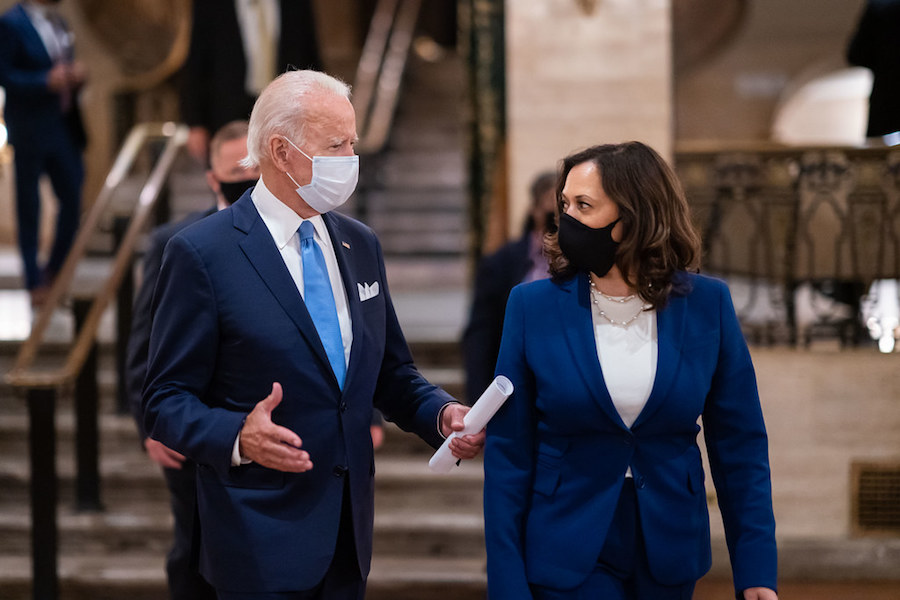 Wearing masks, President-elect Joe Biden talks with Vice President-elect Kamala Harris. A focus for the Biden Administration will be working to combat COVID-19, of which Biden plans to do so through various ways to restore people’s trust in the government during a crisis, including centering scientists and public health officials, making testing widely affordable and available, as well as reinstating the National Security Council Directorate for Global Health Security and Biodefense Dissolved, to name a few.

Barring any successful court challenges of the Nov. 3 election results, it appears that President-Elect Joe Biden will receive enough electoral votes to become the 46th president of the United States. With such a position of power, there are certain problems that need to be addressed. For instance, the COVID-19 pandemic that has killed a total of 243,768 people in the U.S. Replacing the Trump Administration, it’ll be up to the Biden Administration to find another way to combat the virus. Thankfully, they’ve already done that, and have showcased their ideas via their website.

To summarize, Biden wants to restore the people’s trust in the American government to help during times of crisis. He plans to put scientists and public health officials front and center when communicating about the virus. He believes that the officials of public health should make the decisions regarding it; not politicians. In order to do this, he wants to immediately restore the White House National Security Council Directorate for Global Health Security and Biodefense, which was dissolved in May 2018.

Biden also plans to make testing more widely available and affordable. He believes that no one should have to pay for a test out of pocket, no matter who they are or what their status is. He wants to establish at least ten mobile testing facilities per state, and to protect more healthcare workers. He plans to start in larger, more populated cities where the virus is more prevalent, and then expand from there. He also plans on a daily White House report on how many tests have been done.

The safety and health of the American people is another thing Biden wants to ensure under his administration with the virus. He wants to support older individuals and those who are disabled or vulnerable. He also wants to protect and support health care workers and first responders. He plans to make sure that home and community based healthcare services are constantly available, and that proper equipment and staff  can be provided.

Obviously, these things may not be easily achieved early in his presidency, however Biden has ideas as to how they will achieve what they plan to do. He wants to amend the Public Health Service Act, and have it cover all testing, treatment, and preventive services that are necessary in a public health crisis. He also wants to reverse the Trump Administration public charge rule which restricts documented immigrants. He believes that we must do whatever it takes and spend whatever it takes in order to help people, families, and businesses that have been, and are being, affected by COVID.

This is an extremely short summary of what Biden plans to do regarding COVID. I strongly encourage that you read through the full plan on his website. It provides more detailed information relating to what he wants to do, and it’s just good to be as informed as one can be.