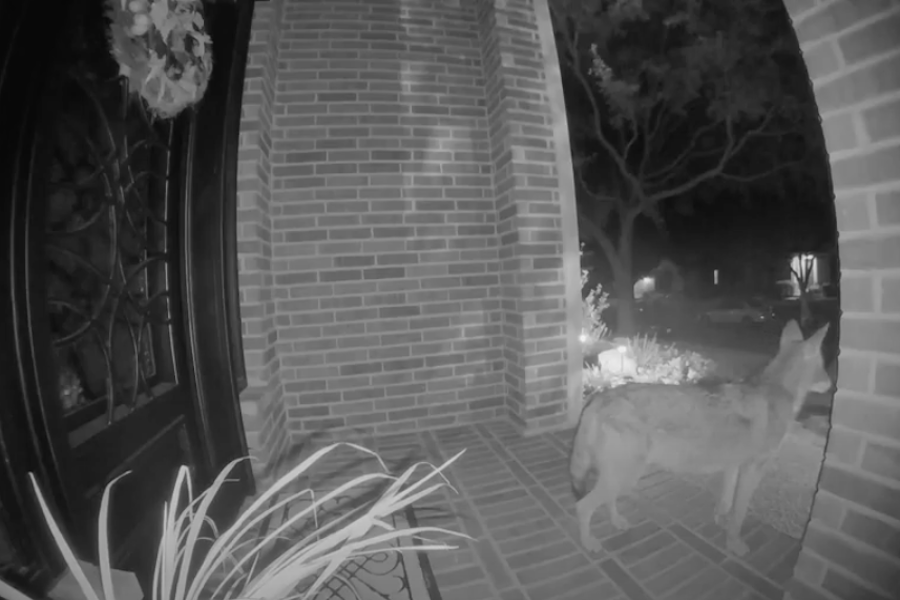 Forget the mice, rabbits, and squirrels.

For one neighborhood coyote with a sweet tooth, free candy is where it’s at.

When people think of trick or treaters, they usually think of young children dressed up in their costumes going door to door to fulfill their sweet tooth. However, sophomore Harley Classe and her family got a furry and rather unusual trick or treater at their front door: a coyote.

The coyote’s midnight snack all started from a kind act.

“We had a bunch of leftover Halloween candy so my dad and I decided to put some out for delivery drivers because we order a lot of stuff online,” Harley said.

However, overnight, their good deed got trashed and eaten.

“When I woke up on Wednesday morning my daughter, Harley, said that something got into the Halloween candy on the porch. It was dumped over and spread across the walkway,” dad John Classe said. “We went back for the camera on the doorbell to look and see who would have done it. We found out at around 12:45 in the morning a coyote has its nose buried in the bucket chomping down on Peanut M&M’S.”

But another look at the footage, the family realized there was a feline eyewitness to the coyote candy theft.

“My cat was sitting in the window of the front door just meowing at it, trying to get it to go away and just sat there watching, just casually,” Harley said.

Although Nala the cat wasn’t fazed about the candy bandit, the Classe family was.

“We were kind of surprised,” Harley said. “When I left for school on Wednesday, we saw that there were candy wrappers out; I just thought it was a squirrel or something. So when we found out it was a coyote, it was kind of crazy.”

M&M’S aren’t typically on the menu of a coyote meal, but according to Rachel Richte, Urban Wildlife Biologist of DFW for Texas Parks and Wildlife, coyotes aren’t too picky.

“Coyotes are opportunistic omnivores, which means they’ll eat a wide variety of things,” Urban Wildlife Biologist of DFW Texas Parks and Wildlife Rachel Richter said via email. “I wouldn’t expect candy to be a coyote’s first choice, but coyotes tend to take advantage of whatever food is available so it’s not too surprising.”

What was a bit surprising was the reaction to the video. John Classe submitted the footage to a couple of news sites and it quickly began trending with TV stations such NBC 5, KTSM 9, KHQ, FOX 24, and more.

“So I was in one of my classes when we were told the story was going to be up,” Harley said. “I started streaming the news the entire time which is weird because I usually don’t do that.”

“I was kind of surprised,” John said. “I guess people were looking for some funny news in the world.”