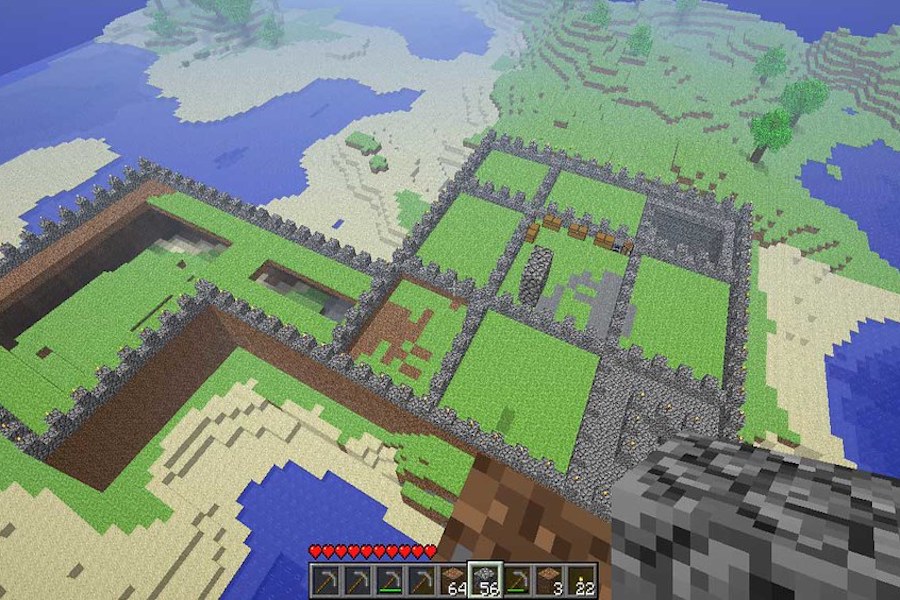 More than 30 of the most popular Minecraft YouTubers and Twitch streamers have gathered together to create a story based server called the Dream SMP (survival multiplayer). “The Dream SMP includes lore and storylines that these creators generally script out and roleplay to fill in the gaps in the script for an audience,” junior Mia Tremmel said.

The 2009 block game known as Minecraft recently resurged in popularity, sparking many YouTubers to start servers or communities with other creators, called survival multiplayer (SMP).

More than 30 of the most popular Minecraft YouTubers and Twitch streamers have gathered together to create a story based server called the Dream SMP, named after Dream, one of the most well-known Minecraft players and creator of the server.

“The Dream SMP includes lore and storylines that these creators generally script out and roleplay to fill in the gaps in the script for an audience,” junior Mia Tremmel said. “I think it is appealing because it is a consistent stream of content, with a story that includes something for everyone, drama, adventure, comedy, and some angst depending on whose perspective you watch from.”

The storylines and character arcs include revolutions, elections, wars, allyship, and betrayal. This adds a lot more depth and intensity compared to regular Minecraft videos while still keeping their own humor and flair on things.

“I think one of my favorite aspects of the SMP is how much of it there is to discuss with friends and it’s super nice to get to both analyze and laugh at our favorite bits together,” junior Hani Brown said.

The boom of popularity came from the nostalgia plus the extra time of COVID-19 with many people revisiting Minecraft YouTubers.

“I think people while in quarantine kinda went back to their childhood and saw that people were playing Minecraft again and it was getting popular and that they were adding a little twist to what is normally put online,” freshman Angelia Smith said.

The new addition of live streaming and storylines attracts more viewers and puts a new level of entertainment.

“I think it’s just good entertainment. It’s similar to watching a TV show or a movie but I think its uniqueness comes from the fact that it’s live. The chat plays a new and unique experience,” e-Sports Club sponsor Chris Ham said. “With many people staying home, I think it helped gain a bigger audience.”

There are many creators who stream or upload Dream SMP content which provides viewers with many different perspectives and personalities to watch.

“I watch a lot of perspectives, but TommyInnit is one of my favorites. Part of that is because of how accessible his content is, like how in all of his videos he includes closed captions,” Brown said. “I really respect the all-time and effort he puts into streaming, making content, and going to university. I’m also partial to Technoblade, WilburSoot, and Quackity because I’ve been watching their content for a long time.”

The Dream SMP has a wide audience, not just teenagers, with many people having a favorite streamer or YouTuber.

“I think it’s fun to watch. It’s spontaneous, exciting, and funny. It’s also streamed live on Twitch so the audience gets to engage with the story,” Ham said. “The most popular is TommyInnit but I personally like Tubbo. I think he’s highly underrated and he often carries the plotline.”

With its long complicated history of different story arcs, many viewers think some are more interesting than others.

“My favorite storyline it’s between the L’Manburg storyline and the current one, the Dream imprisonment lore,” Smith said. “I just think the whole L’manburg storyline was well written and so funny to watch and expand from this little piece of land into a huge plot point and story development. With the Dream storyline, there are so many components to it and I can’t wait to see what happens with it.”

While the Dream SMP is very supportive of all their fans, the creators themselves, just like many gaming communities, lack diversity in the eyes of Brown.

“Many of the streamers have gone out of their way to create an inclusive environment for their viewers,” Brown said. “With that though, I think it’s important to point out the lack of diversity in the Dream SMP and more widely, in the gaming community. It’s overwhelmingly white, cishet, and male-dominated.”

Although there are flaws in the eyes of gamers such as Brown, fans always come together to watch their favorite creators in the Dream SMP.

“The best way that I feel I can describe it is like a TV show fandom,” Smith said. “We all love the content that is being produced, we all love watching it and I think that’s what brings everyone together.”