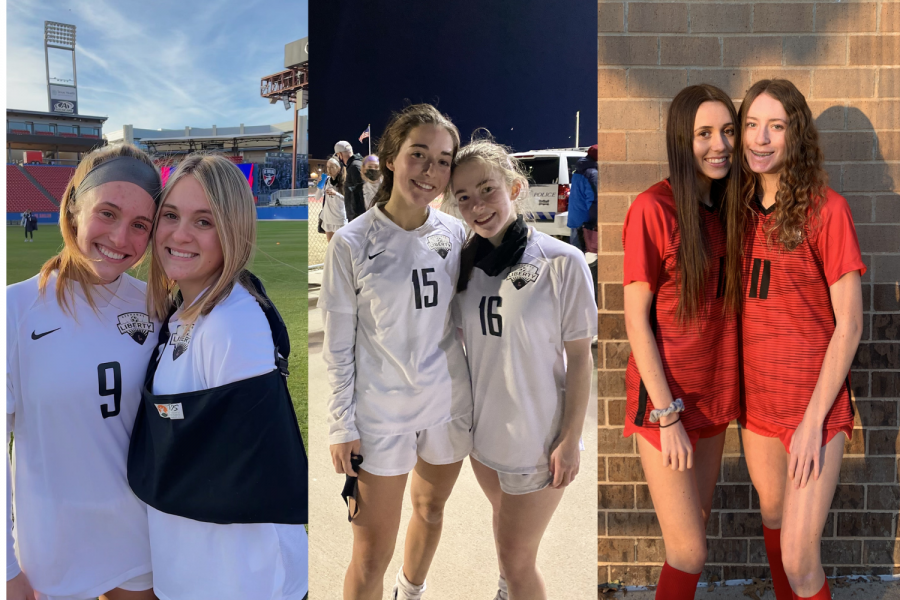 Three seniors on the soccer team get the opportunity to ens their last year of high school soccer playing with their younger sister. For all six, they love the opportunity to play with each other and finds that it pushes them to be better athletes.

Cones, clipboards, and a loud voice are all part of a coach’s toolbox. But when it comes to motivational talks, metaphors are king.

One of the biggest in the sports world is calling a family a team.

But for girls’ soccer head coach Kyle Beggs, it’s not much of a stretch to call this year’s varsity squad a team as the roster consists of three sets of sisters.

“I think it’s pretty unique that we have three sets on the varsity team. I think it’s kind of fun for them because they actually get to play soccer with one another,” Beggs said. “Sometimes you’ll see them go against each other, there’s a little bit more energy and a little bit more ‘haha I got one over on you’. Everybody kind of stops and watches because it’s fun to see which one is going to win. I think everybody gets drawn into that sibling versus sibling battles.”

Senior Ally White loves getting the opportunity to play with her younger sister, freshman Maci.

“It’s super fun we’ve definitely become a lot closer because we’re on the field together,” Ally White said. “I think it’s really special that this is my last year and this is her [Maci] first year we get to play together.”

Not all the bonding happens on the field, as playing together gives them unique opportunities off the field to become closer.

“Me and Ally are really close in general,” Maci White said. “But it brings us together even more being out on the field together and working together. Also, instead of riding the bus I go with her and drive with her to the games. We are able to listen to music and stuff and just talk. Like if I need something or something’s wrong I know I can always go to her.”

With Ally White making the varsity team as a freshman, Maci felt the pressure to live up to her older sister.

“Knowing this would be the one opportunity she [Maci] would be able to play on the same field as her sister [Ally], Maci had a big goal to make varsity as a freshman,” mom Nikki White said.
“I would say the pressure was on from Ally as well.”

With the two White girls growing up in the same club and being coached by the same coaches, their skills share a similar look.

“In my opinion, Ally and Maci are very similar in their playing styles,” Nikki White said. “They played for the same club and coach back in their early academy days, and as of this last year are back with the same club and coach. Because of this, they have been taught a lot of the same skills and techniques much of their soccer careers.”

Their skills are not the only thing that are similar.

“We match each other’s energy,” Ally White said. “Our personalities are very similar. We’re both kind of built the same and we’re both very aggressive. So that definitely helps us be more successful.”

With the White sisters helping carry the midfield, the Clerkin sisters compete for the same spot in defense.

“Sometimes it creates extra tension just because like you know everyone does completes for playing time,” sophomore McKenna Clerkin said. “But overall, I don’t really think it’s caused any problems like in our relationship.”

With the sisters getting to play side by side it helps create a deeper level of understanding.

“I think it helps our communication,” senior Anna Clerkin said. “Just because we’re already so used to communicating with each other. it just makes it more casual and we know what to say to each other to know the other person won’t get mad.”

Their competitive nature and communication is something that is noticed off the field.

“They have fun playing together but it definitely brings some good natured competition,” mom Kim Clerkin said. “They are both very competitive so it is hard when one plays more than the other or if one isn’t happy with their play, but they are always supportive of each other on and off the field.”

For senior Kallin Brown, playing with a sister on the Redhawks soccer team is nothing new.

Having experienced playing with a sister before, Kallin tries to teach Reese everything she learned.

“When I was talking with Kassidy she was mentoring me,” Kallin Brown said. She was helping me through the program and through high school. Now I get to do the same thing to Reese.”

The Brown girls see playing with each other as motivation.

“Having her with me pushes me a lot because like obviously I want to do a lot better than she does,” sophomore Reese Brown said.

The competitive nature of Kallin and Reese is also seen through the eyes of their dad, Rick Brown.

“All three girls have provided great memories playing high school soccer together,” Rick Brown said. “They push each other, support each other, and don’t cut each other any slack, even when one of them gets locked in the bathroom for an entire practice.”

Having three sets of siblings on the team, can be an advantage in a game situation.