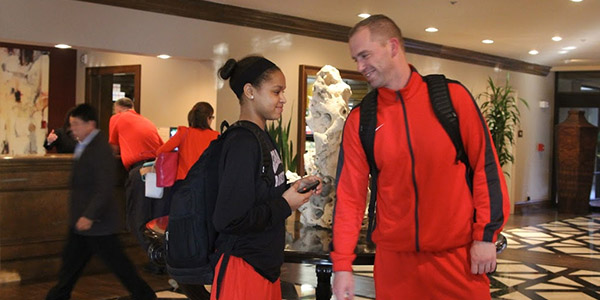 This may not sound like the ingredients for sustained success, but girls’ head basketball coach, Ross Reedy and his program, year after year, find ways to win. This year is no different as the Redhawks are back in the state semifinals for the third year in a row, with the team seeking back-to-back state titles.

Heading to San Antonio on Friday for its game against Lubbock Cooper High School on Saturday, Reedy’s first goals as a head coach started humbly.

“At first it was we wanted to win a district championship,” he said. “And then it became, we want to do well when we get to the playoffs, so you front load your schedule with some of the most difficult teams. That is what gives you an actual revelation of who you are.”

Taking on 6A state and national powers such as Duncanville and DeSoto on a yearly basis and losing might demoralize some teams, but for the Redhawks, these games are the building blocks for the teams recent run of success.

The players have changed over the years, but there’s been one constant: Reedy.

“I know that Coach Reedy would deny this, but as a former player at Liberty, I can confidently admit that Coach Reedy is the reason for Redhawk basketball program’s success,” Tulsa Hurricane guard, and former Redhawk (2017), Rebecca Lescay said via text. “His intellect and wisdom plays a huge role on and off the court.”

Lescay is right in that Reedy believes it’s a team affair.

“You are capable of very little by yourself,” Reedy said. “You have to surround yourself with good people. And our players are very much an indication of that. And then of course the coaches I have. They carry most of the load, often we head coaches get recognition because they need a person to get recognition, so that’s why you get it.”

The weight of a game often rests on the shoulders of the players on the court, but according to 2018 graduate and current Harding University forward Katelyn Burtch, Reedy’s message goes beyond X’s and O’s.

“It all comes back to the idea that as a team we were going to put in the time/work together so that we could see the results together,” Burtch (2018) said via text. “Togetherness was really the biggest aspect. It’s all about doing what’s better for the team and doing whatever it took to get stuff done.”

It’s this mindset that has helped the girls’ basketball team become one of the top 5A programs in the state.

“The program is successful because the graduating players spend four years not just playing basketball, but pouring into the players left behind to protect the legacy,” former player Allison Elliott said. “Ensuring they leave the program stronger than they found it.”

But to build those habits, Reedy often has to build a new foundation.

“When you have certain instincts, they have to be broken down,” Reedy said. “In that process, you actually get worse. And it’s frustrating for the kids because they can’t identify with who they are. And then you build new habits. And now they get their instincts back and they start acting accordingly. And then that’s when things click.”

Helping each player get through the frustrating times, is another teammate who quickly became something more.

“I would describe it as a family,” former player Kenzi Glover (2019) said via text. “The girls I played high school basketball with are still some of my very best friends to this day. As close as I was to all of my teammates, as soon as we stepped foot into the gym we were there to get after it. We competed and pushed each other in practices to make each other better. This program has strengthened me physically, but it has especially strengthened my mental toughness.”

“It’s a daily grind to get through our practices, to be a part of this team,” Reedy said. “I think if you were to ask any one of those they would say that it’s rewarding, but I don’t think any of them would say that it was all, cotton candy and Ferris wheels.”

In anything, Reedy wants each player to question themselves in a constant battle to be their best selves.

It’s a lesson he had to learn himself, and one he credits the current principal of Melissa Middle School, Marcus Eckert, to teaching him.

“If it wasn’t for Marcus Eckert,” Reedy said. “I probably never would have developed. When you have a mentor that is your peer, we’re the same age, but he was a far better professional and far better basketball coach than I ever thought about becoming. And he immediately held me accountable and told me the error of my ways which was pretty frequently. And, I was hard headed so it was probably tough to get through to. But once it clicked in, I really saw the value in all of it, even kind of stick with it.”

Striving to instill a lesson of humility in Reedy, Eckert deflects some of the credit. In his eyes, it was a matter of helping Reedy find his way.

“It was evident that Coach Reedy was going to be successful in whichever educational career path he chose,” Eckert said. “I simply encouraged him to stop wavering and commit to what was obviously his passion.”

With four trips to state semifinals in the last six years, there’s no questioning his success as a head coach, but according to 2015 graduate Allison Elliott, not only does Reedy coach from the sidelines, his players also teach from the court.

“It would not be fair to share all the things we learned from him without mentioning that I believe his favorite part of his job is learning from his players,” Elliott said. “The only characteristic that can equally match his level of competitiveness for sport is his curiosity for life. He did so much more in shaping me as a person than simply as a player.”

No matter how many titles the team takes home, Elliott believes Redhawks basketball will never stop pushing themselves.

“There is a sense of humility in the program – the program still operates as if we’re the underdog or has something still left to prove. As a state champion, state runner-up, Sandra Meadows Classic Runner-Up, multi-time district champion, this program has already sealed its place in history,” she said. “However, you would not think that by the way the team continues to work every single day. In 2012, the idea of being a state championship program was only a wishful dream. A decade of practicing humility, never getting complacent, and always striving for improvement has made that dream a yearly reality. Even now, coach Reedy believes there is always still something left to prove.”

For many coaches, the action on court and a winning score is where things are proved. But for Reedy and the Redhawks, it’s about more than trophies and titles.

“I don’t believe in a win at all cost kind of mentality. Winning is important, but I think it’s a byproduct of the kind of character that you hope to not only instill, but exude,” Reedy said. “That should be well represented within a program, your kids, you’re staff and everybody around and so I love that, I love Liberty.”