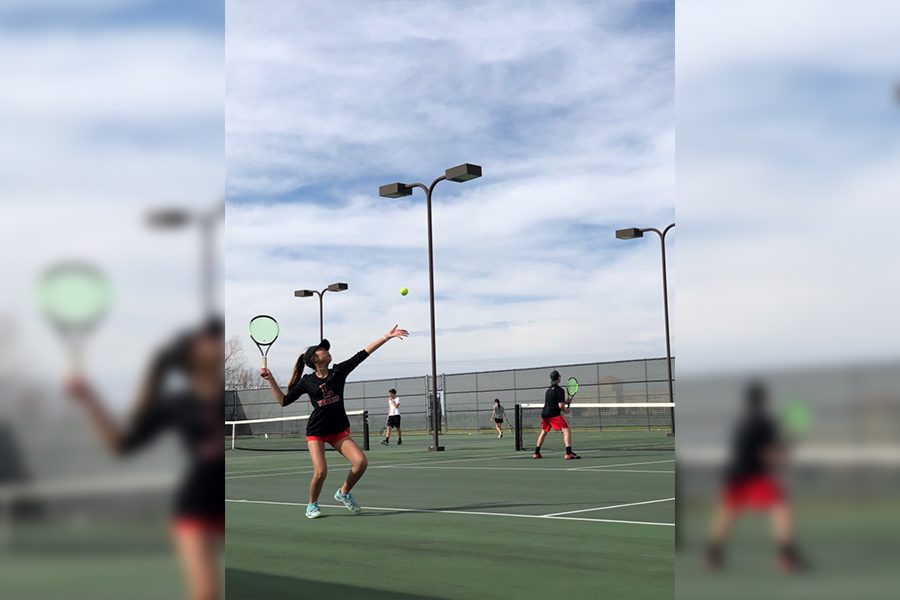 The tennis team takes the courts all day Tuesday as they plan in the district tournament. The teams main goal is to qualify for regionals, and showcase all of their hard work.

Hoping to carry their individual seasons beyond district boundaries, the Redhawks tennis team takes on the District 9-5A Tournament at 8:00 a.m. Tuesday at The Courts.

To prepare for their upcoming competition the team has focused on more serious matches in practice.

“Lately, we have had more practice matches, people playing what they’re going to play in the tournament instead of just fun drills,” sophomore Milla Dopson said.

With more work put into practices, head coach Erica Dopson has her sights set on advancing.

“We hope to advance to Regionals and have been working hard to achieve that goal,” coach Erica Dopson said. “I am so proud of this group of tennis players. They have worked very hard and are prepared. I am excited to see them compete in this district which remains the strongest in the state.”

For some underclassmen, Tuesday is the start of the district tournament, but for others, it’s the potential last match of their high school career.

“I think it is going to be super emotional for the seniors because last year this didn’t even happen,” Milla Dopson said. “I think people are excited that they get to try their best and go all out for districts but also sad because this could be the last match of the season for some.”

This season, the team focused on having the most “normal” season possible, following the cancellation of last year’s closure due to COVID-19.

“We have tried to keep the team environment and cheering while staying socially distant,” Erica Dopson said. “It has been a challenge at times, but we have been able to still support each other.”