Going beyond the newsroom for dream interview project 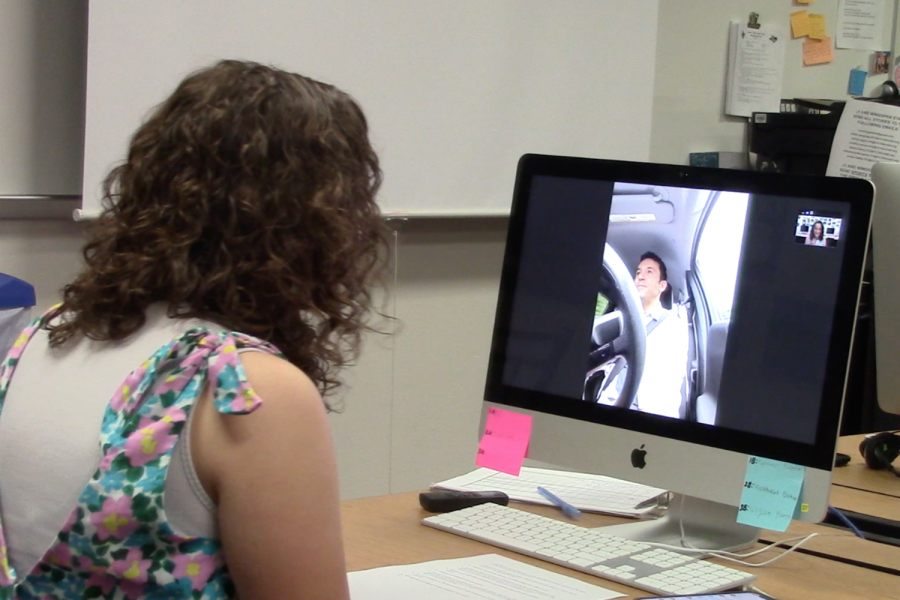 In an attempt to bring Wingspan beyond the newsroom and let students learn to not be afriad to ask questions, newspaper advisor Brian Higgins organized a dream interview project. Staff members, including junior Emily Thomas, pictured above, got to have an interview with actor Fred Savage.

Looking for a way to bring a new energy to the Wingspan newsroom, newspaper advisor Brian Higgins turned to something random.

“I was sitting at home and trying to think of things to do for Wingspan that were a little bit different,” Higgins said. “And I just thought of the idea, why don’t we reach out and try to get some big-time interviews and so I made that a class project.”

Staff members were told to provide a list of five people they would want to interview if ever given the chance.

“At first it was just something that I thought was a fun way to figure out why we had the role models we had, or why we look up to certain people,” senior Shreya Jagan said.

But it turned out to be more than that as the staff was told they had to reach out to the people on their list and try to get an interview.

“It was definitely really nerve-racking because these are famous people,” junior Hannah Beeler said. “Like they don’t really talk to everyday people like me and I was kinda nervous about if they would respond at all, what they would say if they did respond, things like that.”

“I didn’t really think much would come out of it,” junior Emily Thomas said. “I thought it was kinda silly, cause who thinks they’re gonna get a response from a celebrity”

But these three did get responses, with Thomas the first to do her interview.

“I reached out to Fred Savage, who’s an actor,” Thomas said. “He responded to me and I got to do an interview with him, which was really cool. He was really nice and it was a really awesome experience.”

For Higgins, the project wasn’t about getting interviews, it was about something beyond the Wingspan newsroom.

“I feel like I learned to kinda just get out there and not be scared to reach out to famous people that you don’t know and that you don’t think that you’d ever talk to,” Beeler said. “Because you never know what will happen.”