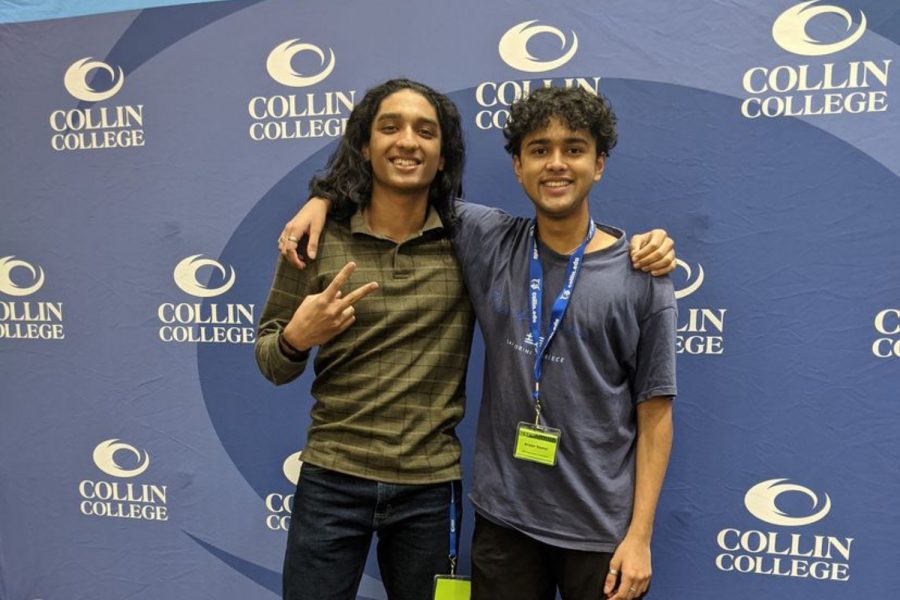 Senior Aryan Samal and junior Akash Pradeep competed in a hackathon alongisde many other high school students in hopes creating a solution to a problem through a piece of software. Through the 11-hour test of endurance, their team created a website that showcases an app that tracks the organic molecules that are present in compost bins.

Several high school students gathered at Collin College on Saturday to compete against each other in an 11-hour test of endurance.

However, this was not a test of physicality, but instead mentality.

Hackathons are marathon-programming competitions in which individuals collaborate and apply their knowledge in order to create a solution to a problem through a piece of software. At the end of the allotted time, teams present their proposal to a panel of judges.

For senior Aryan Samal, participating in Collin College’s Hackathon allowed him to explore his field of interest and demonstrate his passion.

“I wanted to participate in the Collin College Hackathon because I’m really interested in computer science, and I had never been to a hackathon,” Samal said. “I also wanted to compete in a computer science-related event to see how I stack up against other high schoolers, but also express my creativity in a unique way.”

Similarly, after hearing about the event from his computer science teacher, William Bugh, Samal’s partner, junior Akash Pradeep, attended the event to gain more knowledge about programming and coding.

“At first, I considered attending the event, but was slightly reluctant because I had never attended a hackathon before and was slightly nervous about competing,” Pradeep said. “However, after encouragement from my family, I decided that the only possible outcome from going to such an event would be a learning opportunity.”

Bugh was pleased to have one of his students attend such a beneficial event.

“I feel very glad and proud that a student of mine recognized the opportunity to try something different,” Bugh said. “I am also thankful that as a teacher I passed along the event information and did not withhold or ignore it, thinking none of my beginner CS1 students would be interested in it.”

Before the competition, each competitor was given videos regarding programming languages, such as Python, JavaScript, HTML, and CSS, to help prepare them.

“We had a really unique idea to use composting as our base idea, and then create a website to showcase an app that tracks the organic molecules that are present in compost bins, verifies which items are compostable, and also [notifies] when the compost is ready to be incorporated into soil,” Samal said. “The part that we struggled with was how to create the app in such a short time, but eventually we realized that we could just create a model of what the app would look like, instead of actually having to create it in our limited amount of time.”

Each teammate had a specific role in creating either the website or app.

“One of our teammates and I primarily worked on creating the website which would be used to showcase the simulation of the app,” Samal said. “We did this by using a front-end framework called Bootstrap, which incorporates HTML, CSS, and JavaScript programming languages.”

After finishing and presenting their proposition to the judges, the results were decided with Samal and Pradeep receiving first place in the whole event.

“Honestly winning the event was a crazy experience because this was mine and Akash’s first hackathon,” Samal said. “We had no idea what to expect, so to be able to get first place on our first time competing was just shocking and really exciting.”

Receiving a programmable drone and various miscellaneous items were not the only rewards Samal and Pradeep gained.

“The hackathon was a terrific experience not only for learning new skills, but having fun, trying new things, and networking with people,” Pradeep said. “It was definitely worth it and an experience I’ll never forget, especially since we performed successfully and I got to compete alongside a friend.”