Home is where the music is

Two instruments and one passion, Johnson proves music is her forte 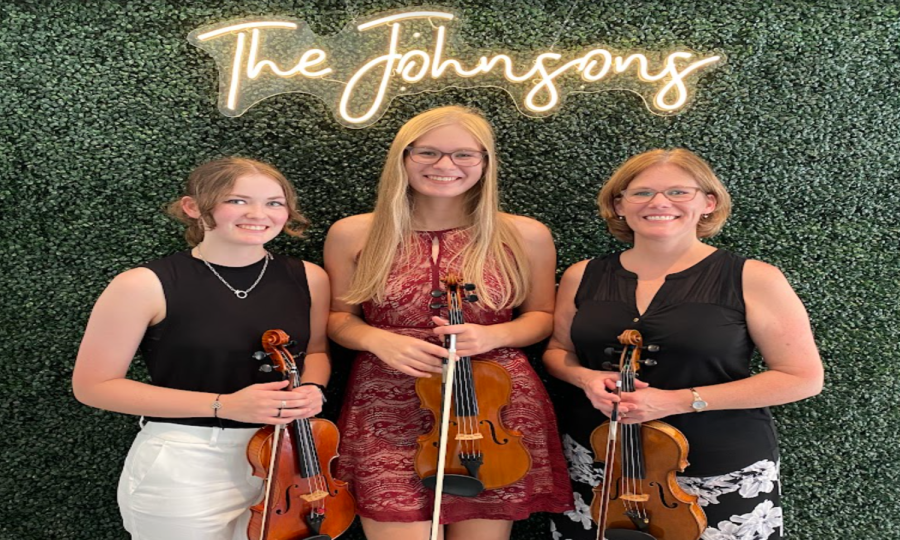 She enters the home of her piano playing, violin plucking, trumpet sounding family and knows she’s in the right place.

Senior violist and trumpet player Julia Johnson has been immersed in the world of music since the day she could crawl, thanks to her performance-driven family. With both Johnson parents teaching music to students for the past two decades, it was inevitable that the love for teaching, beat, and rhythm would be passed down.

Julia, the current recipient of the $12,500 Texas Music Educators Association Past-President Scholarship, takes the torch of her musically-inclined mother and father as she inches closer to her dream of becoming an orchestra director.

“I’m always seeing or hearing my mom teach in the house,” she said. “I wake up on the weekends, I come home from school to her teaching. I know many music educators and I see how much they love what they do, and I’ve always loved music so that’s why I was wanting to do that.”

The multi-talented high schooler was a part of the 0.006% of students to receive the award.

“I actually didn’t know about the scholarship until a lot later than it was supposed to be announced,” Julia said. “I was honored, of course surprised. There’s only four of us in Texas that got it.”

Orchestra Director Julie Blackstock thinks the award will be a great stepping stone for Julia as she continues in the world of music.

“She has really just shone,” Blackstock said. “I’ve seen so much growth in confidence, in her ability to overcome difficult situations and problem solve. I think that the honor of being selected as one of the four recipients is truly something to be proud of. It only goes to somebody that is planning on majoring in music going forward in their life. I think this is our first person in Frisco that has been named a TMEA Scholar, so it’s something really to be proud of for Julia.”

Each fall, Julia’s father Kyle works with his own students at Jasper High School to prepare them for All-State Band auditions. Understanding the immense dedication and effort students undergo to craft an All-State worthy performance, Kyle takes pride in his daughter’s award.

“It means a lot,” Kyle said. “The state, TMEA, how they view her, what she could do as an educator. We’ve seen that for years.”

In his eyes, having TMEA recognize the person he watched Julia grow to become is a reward on its own.

“She’s always been very mature,” he said. “She’s always been a great leader and she’s shown that the last several years both in band and in orchestra. It’s neat to be able to watch as TMEA recognizes that also.”

Her sister, sophomore Nicole Johnson, could be on the same path as she also grew familiar with music at a young age.

“My entire family has always been music-oriented, and so I’ve always had music in my life,” Nicole said. “My mom started [teaching us violin] when we were three years old. I just kept with it because I really enjoyed it. With the clarinet in the band, I didn’t really start thinking about it until the end of elementary. My dad started trying us out on a couple of different instruments and so I found a love for clarinet as well and figured I’d just do both. I just love music because it’s helped me grow as a person.”

The music has helped Julia grow as well as she is a leader in both band and orchestra.

“I’ve been in a leadership role since sophomore year,” Julia said. “I was a librarian for orchestra and then junior and senior year I was on the leadership team for band. Ms. Blackstock has been such a great teacher, along with [my band director] Mr. Weaver. They’ve both been very accommodating with everything, like making sure I could fit both band and orchestra into my schedule.”

Growing up, the sisters have had the ability to perform in a variety of settings alongside their musically-oriented parents.

“It’s a lot of fun,” Julia said. “My dad and I will usually do trumpet duets. My sister and I, since we’re both B-flat major instruments in trumpet and clarinet, we’ll play duets. On every Christmas my whole family has our part of a quartet and we play at a church. I play viola, my mom and sister play violin, and my dad does trumpet.”

For Julia’s mother Kathy Johnson, it seemed a natural evolution that Julia would continue in the family legacy of music as she continued to grow older.

“It’s like a culture,” Kathy said. “It’s just been music all around. You just always hear music in the house. When you start really young you feel confident in it and you enjoy it. I have always said to them ‘you don’t have to go into music,’ but sometimes when you’re surrounded by it, it’s just who you become.”