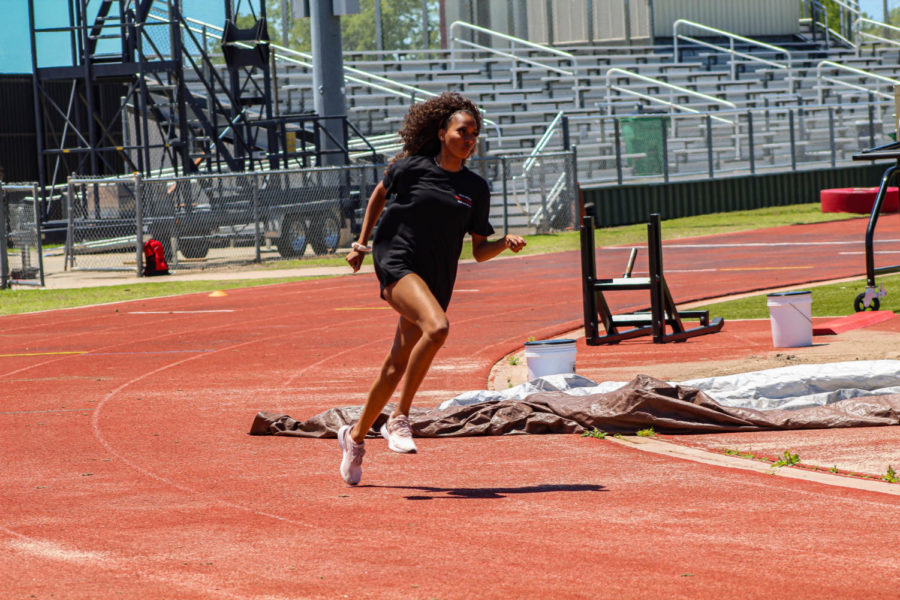 Senior Cori Ross focuses in on her finish during practice as she prepares for the State UIL meet. Accompanied by two seniors competing for the boys, the girls relay team will take the track Friday.

Set to compete in the UIL 5A Track & Field State Meet on Friday at UT’s Mike Myers Stadium, the girls’ relay team will be accompanied by two of the boys’ runners, seniors Cam Wooley and Chris Johnson, as they make their way to Austin.

“My hopes for the state meet are that these girls can finish what they started at the end of Regionals last year,” coach Khera Vay said. “I want nothing more than them to be able to end the season feeling proud of who they are as people and what their hard work has allowed them to accomplish.”

For senior Sydney Bishop, a member of the girls’ relay teams, leaving her mark on the competition is the ultimate goal.

“It’s really satisfying to finish what we started last year at regionals and just really live up to our best potential because we all knew that we could make it to state,” Bishop said. “The fact that we have made it to state is just really refreshing. We know there’s still work to be done and we can’t be satisfied yet because we still have races to run and we still need to leave our mark in Austin.”

For Wooley, winning is less about outside recognition than it is about the feeling of personal accomplishment.

“You know, if you win something, people don’t care,” Wooley said. “You win for a year, and then it’s like, you can be like, oh, we went to state last year. But it’s like a new year, you know? So I got to go out there and compete. Do me, you know.”

Competing in an individual event, without his teammates to back him up, Johnson believes Friday’s meet will bring a different atmosphere.

More than just an opportunity to win another medal, the competition will allow the athletes to display their growth and talent one final time before graduating.

“I feel like it’s a really great opportunity to showcase my talents against the best in the state,” Johnson said. “You know, my goal is always to go out there and win, compete, you know, get first place. I think anybody that makes it to state that’s their top goal.”