The busy bees of band camp 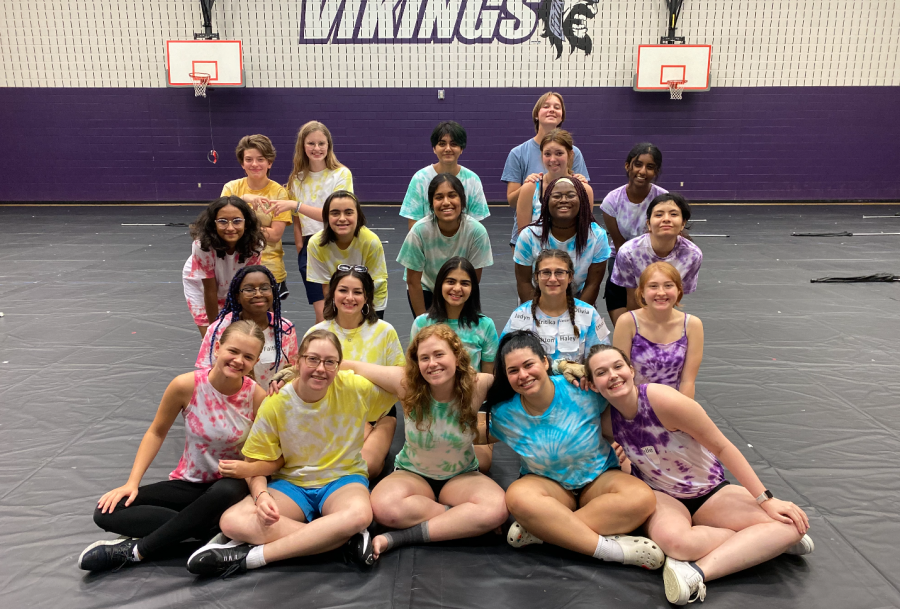 Pictured: the Redhawk color guard practices in the Vandeventer Middle School gym. Over the summer, the guard, as well as band students, attended Vandeventer for practices in preparation for their fall show, Queen Bee. Despite having to adjust to a new location due to school renovations, both departments were able to get ahead of schedule in their rehearsals for this upcoming year.

Though most Redhawk students made their return to campus Wednesday, members of the band and color guard departments were busy like bees over the break, with summer camp rehearsals to prepare for their fall show, “Queen Bee.”

With practices being held for a week in late June, as well as the week of August leading up to school, senior and drum major Marin Webber believes those new to the program were given time to ease into the rhythm of the fall’s competition season.

“I believe band camp went really well,” Webber said. “The freshman were able to learn and retain a lot of information. We have made a lot of progress having only been doing it for two and a half weeks. Now we are really prepared for this upcoming season because we are working super hard on the music and memorizing it, not to mention we are ahead of schedule.”

While in previous years color guard has rehearsed directly with the band, senior member Isabelle Raade describes how this year the flag throwers were able to have an individual practice time.

“Band camp was completely different this year for guard,” Raade said. “We got to school then did a Zumba workout altogether, and then [color guard] went to a different gym to work on show choreography while band either went outside to learn marching fundamentals or went into sectionals. It just made more sense for everyone to stay somewhat separated.”

“The team has grown exponentially since the season started,” he said. “Not only have they learned how to spin their equipment, but they have blossomed into outstanding performers. They have learned how to work hard and persevere. They’ve met every challenge with positivity and maintained an environment that allows everybody to be themselves.”

Both departments managed to continue their practice despite not being able to have access to the school, which was unavailable this year due to campus renovations.

“It was really different, we had to go to a middle school nearby to practice,” senior Ryan Scutari said. “It [skewed us a little] from our normal schedule and habit. It was a little bit weird at first, but once you got into the routine the first few days, it was easier to fill in.”