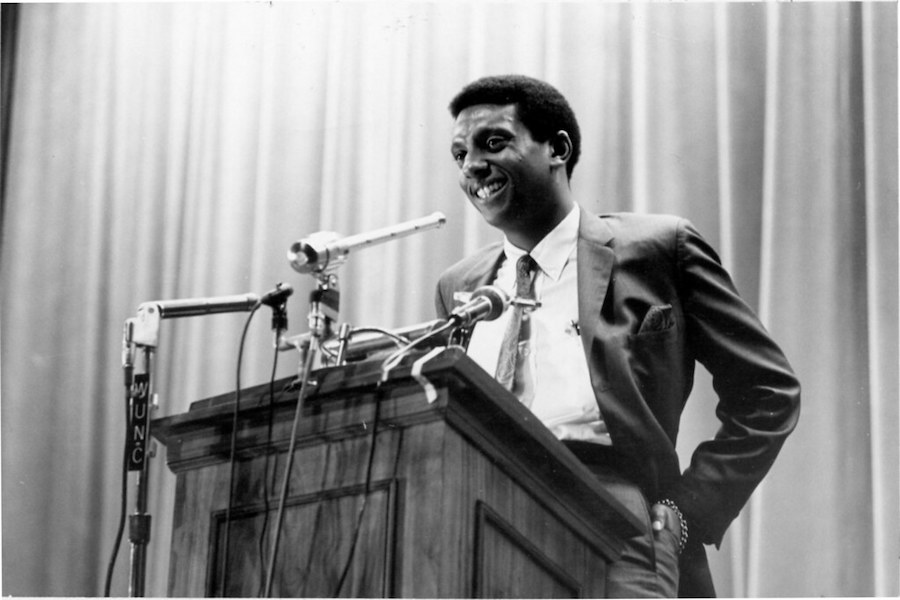 Kwame Ture, also known as Stokely Carmichael, was a Black nationalist, socialist Pan-Africanist, anti-capitalist and revolutionary. He was a leading figure in the Black Panther Party and the Student Nonviolent Coordinating Committee, as well as a leader of the socialist political party All-African People’s Revolutionary Party.

Born in Port of Spain, Trinidad and Tobago in June of 1941, Kwame Ture, also known as Stokely Carmichael, was a Black nationalist, socialist Pan-Africanist, anti-capitalist and revolutionary. He was a leading figure in the Black Panther Party and the Student Nonviolent Coordinating Committee, as well as a leader of the socialist political party All-African People’s Revolutionary Party.

When he was a boy, he and his family moved to The Bronx in New York. After high school, Carmichael went on to attend Howard University in Washington D.C. While in college, he signed onto the Freedom Rides, travelling with other activists on buses throughout the South to challenge segregated public transportation. The police targeted and brutalized the activists, and Carmichael was repeatedly arrested during the Rides, spending his 20th birthday in the Parchman Penitentiary in Mississippi.

After the Democratic National Convention failed to recognize the Mississippi Freedom Democratic Party, Carmichael began to develop all-Black political organizations, including the Lowndes County Freedom Organization. He spoke in support of Black Power through speeches and writings.

In 1968, Ture married South African singer Miriam Makeba, and moved to Ghana in the same year. One of the reasons Ture moved there was because the FBI targeted him, as they did many Black revolutionaries. A year later the two both moved to Guinea, where they would separate and divorce in 1973. It was in Guinea that Ture changed his name from Stokely Carmichael to Kwame Ture in honor of two early Pan-Africanist, Kwame Nkrumah and Sékou Touré. Ture began campaigning internationally for revolutionary socialist Pan-Africanism. Nkrumah was a mentor of Ture’s and he devoted the last 30 years of his life to the organization as an organizer and Central Committee member, though many regarded him as the leader of the A-APRP.

Later, Ture married Marlyatou Barry, a doctor from Guinea. Together they had a son, Bokar Carmichael, and then divorced in 1982. Ture was diagnosed with prostate cancer in 1996, and after two years of battling it he died in 1998 at the age of 57 in Conakry, Guinea. He said that the cancer “was given to me by forces of American imperialism and others who conspired with them.”

Ture has three books, Ready for Revolution: The Life and Struggles of Stokely Carmichael and Stokely Speaks: From Black Power to Pan-Africanism, and Black Power: The Politics of Liberation. He also appeared in The Black Power Mixtape 1967-1975 and Black Panthers 1968 short film documentary.