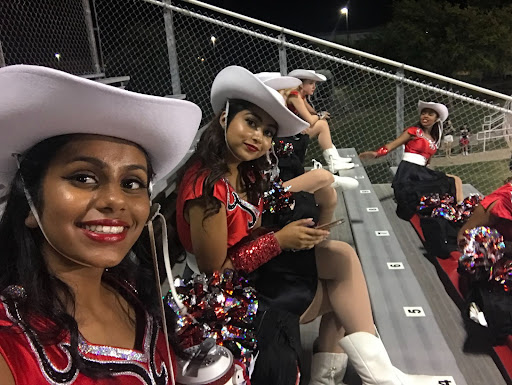 Red Rhythm dancer Aashi Oswal (pictured far left) poses for a selfie with her teammates. The team is kicking it back in season for tryouts for next school year.

Saxena: “My favorite memory of dance would have to be going to the Youth America Grand Prix when I was 12. It was amazing, it was such a great experience competing at such a prestigious ballet event.”

Wingspan: What made you want to try out for Red Rhythm?

Saxena- “I really wanted to be involved in something I could do at school and have kind of a break from ballet because I’ve been doing it for so long.”

Wingspan: What does a typical schedule for practice look like everyday?

Saxena- “We have a class every other day for an hour and 30 min and then we have morning practice 2-3 days a week from 6:15- 8:00 am. We have after school practice with the band before game days, then we have games on Fridays or Thursdays.

Wingspan: How do you balance red rhythm with your school and social life?

Saxena- “I really just have to focus on prioritizing school, even though I dont always want to. I have to make sure to get all my school work done and get enough sleep, because we have practice really early.”

Wingspan: How did the reality of performing at the first football match compare to the expectations?

Saxena- “I did not expect there to be so many people, and honestly it was so much better in real life then I imagined. The energy was off the charts, and I really enjoyed it.”

Wingspan: What do you want your future from Red Rhythm to look like?

Saxena- “Right now I want to focus on making all the dances and performing well throughout football season, basketball season, contest season, and spring show. Eventually in 11 or 12th grade I want to try out for an officer position,  maybe junior lieutenant, senior lieutenant or captain.

Wingspan:  Do you want to continue dancing in college, and what kind?

Wingspan: How has the Red Rhythm community welcomed you since you’ve joined?

Saxena; “Every girl and Simon on the team is just so inviting and they..it’s like a family. Dancing with them is just…all the football games and stuff, you know, I love it.”